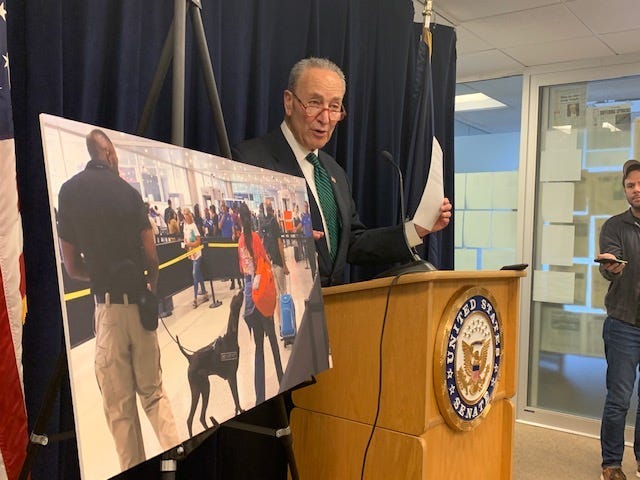 NEW YORK (WCBS 880) – Sen. Chuck Schumer is blasting the White House for proposed cuts that would eliminate some of the specialized bomb-sniffing dogs used to fight terrorism at transit hubs like Penn Station, while a New Jersey congressman said he’s outraged antiterrorism funds are being cut in his state.

“Just when you think things have really gone to the dogs, you dig through the president’s proposed budget,” Schumer said at his Midtown Manhattan office Sunday.

Schumer, a Democrat, is hounding the White House on cuts that would eliminate all of the VIPR dog teams used in counterterrorism operations, including at transit hubs in New York City.

VIPR dogs— Visible Intermodal Prevention and Response teams— are specialized canine units that are sent to airports and train stations. About 50 dogs are assigned to the New York area.

The budget cuts would axe all 31 of the VIPR teams nationwide, which Schumer says agencies like the NYPD rely on.

The cuts would save $59 million; they wouldn’t eliminate all bomb-sniffing dogs nationwide, just the VIPR teams that go from place to place when needed.

He promised to hound the White House until they back away from the cuts.

Pascrell called it a bullseye on the Garden State’s back and that it goes against the Trump administration’s anti-terrorism message.

“After all the talking that they’ve done about protecting Americans, I find it mostly bologna,” Pascrell said. “It’s a step backwards and it’s a foolish one at that.”

The proposed cuts from the Federal Emergency Management Agency (FEMA) would leave New Jersey with $15 to $19 million for its Urban Areas Security Initiative instead of the $20 million it received previously.

Pascrell called the cuts a mistake, especially two months after the anti-Semitic attack in Jersey City that left six people dead—three civilians at a kosher market, a police officer and the two attackers.

Pascrell said, if anything, New Jersey should see an increase in funds.

“I would say that New Jersey could use another $3 to $5 million right now in bolstering our defense against domestic and foreign attacks,” he said.

The congressman said he’s sending a letter to the Department of Homeland Security to restore the funds.