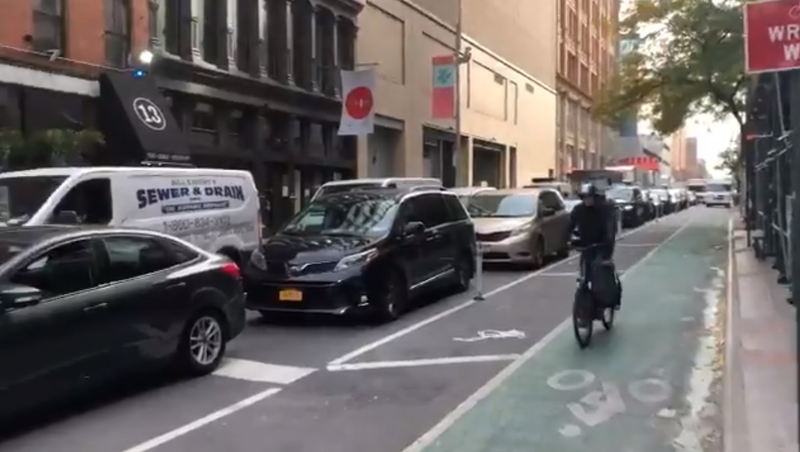 NEW YORK (WCBS 880) – Residents of the Union Square area who are unhappy about the new 14th Street busway showed up at an MTA press conference Wednesday to demand something be done.

Michael Certo, who lives at 13th Street and University Place, is among the residents who say the busway has backed up traffic on nearby side streets. He’s been posting videos under the hashtag #14thStreetNightmare to document traffic jams and other issues he says are caused by the busway.

“Cars backed up all day—7:30 in the morning, 11 o’clock at night. We’re starting to get panhandlers who can now stop on that street corner, because the cars can’t move through four or five lights,” Certo told WCBS 880.

@PIX11News Problems created by the 14th St. bus change is unreported We are asking the City Councilwomen Rivera for help. Some video of E. 13th St. near University Place. A nightmare most of the day. Fear of being steamrolled into permanent change. pic.twitter.com/X3sYZ27Ay8

The MTA held the press conference to announce a 20 percent increase in weekday ridership on the M-14 Select Bus Service and to warn drivers that street and bus–mounted cameras are capturing vehicles that block the bus lanes or fail to make the first right turn off of 14th Street as required.

“There was some independent company that released some data that said traffic speeds have been about the same, which matches what we’ve anecdotally seen,” Beaton said. “That’s not to say traffic is fast, but we think it has not changed substantially from what it was before.”

But a 14th Street resident who didn’t want to give his name said traffic is now backed up day and night—and that means more noise for people who live in the area.

“What happens is cab drivers, Uber drivers, blow their horn, not ‘toot toot,’ but they’ll blow their horns for five seconds, ten seconds, right in front of police officers, who do absolutely nothing,” he said.