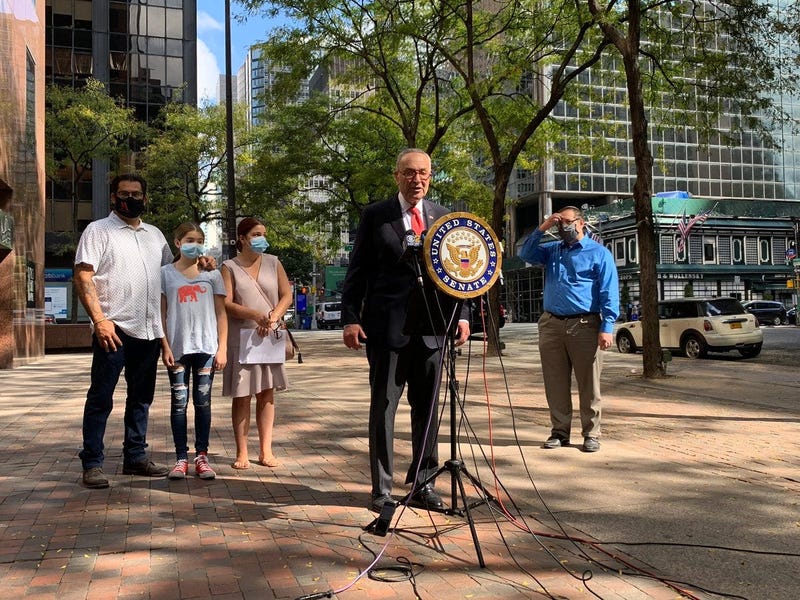 NEW YORK (WCBS 880) -- Sen. Chuck Schumer said Democrats will be doing everything they can to slow down or stop Amy Coney Barrett from joining the Supreme Court.

During a news conference outside his Manhattan office on Sunday, Schumer said his chief concern, should Barrett join the high court, is the Affordable Care Act.

“She will be the swing vote on the court. And if she gets on that court, it's a virtual certainty that over 150 million Americans’ healthcare will be hurt dramatically,” he said.

A day after President Donald Trump nominated Barrett to the court at a White House ceremony, Schumer called the move by the president a power grab.

“We will use every tool in the tool kit to slow things down,” Schumer said. “(Majority Leader) Mitch McConnell has so commandeered the Senate, has so defiled the Senate, there are fewer tools and they’re less sharp—but what is there, we will use.”

Schumer said he won’t meet with Barrett because “the whole process has been illegitimate.”

“Her views are so far out of the mainstream, on health care above all, but on so many other issues as well,” the senator said.

Republicans have said fears the Affordable Care Act will be gutted are overblown. Missouri Sen. Roy Blunt told NBC’s “Meet the Press” on Sunday that a lot of the law is already baked in.

“The one provision that I authored was keeping people on their parent's insurance until they're 26. I sure don't see that getting reversed. I don't see preexisting conditions being protected being reversed,” Blunt said.