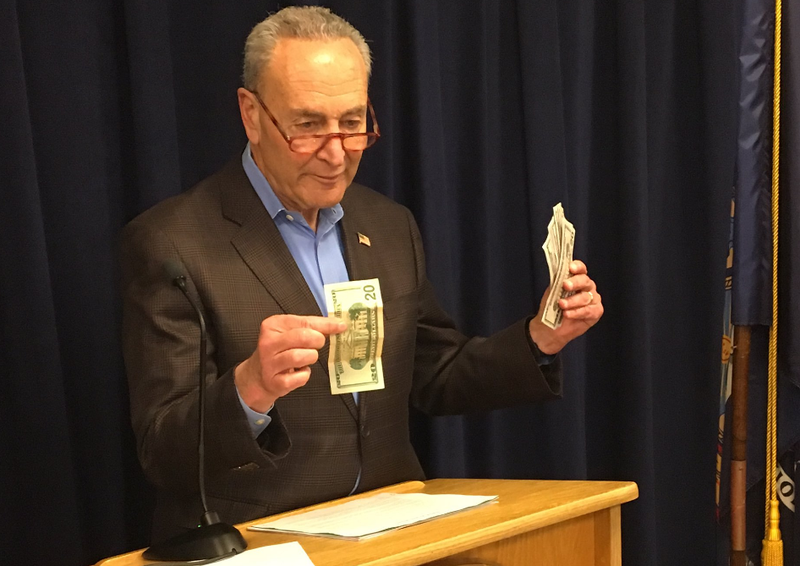 NEW YORK (WCBS 880) – If you’re getting cash this holiday season, check the bills—Sen. Chuck Schumer says there’s been a surge in counterfeit “funny money” this year.

“All of the sudden there’s a new kind of counterfeit money that’s being used, because online sellers are selling fake, Hollywood money,” Schumer said at a news conference Friday.

Schumer says the movie money is flooding the market and anyone can buy it online for next to nothing.

At a quick glance, the bills look real. But if you examine them closely, you can see the upper right corner and the words Motion Picture Use Only. @SenSchumer says this movie money is leading to an explosion of counterfeit bills. If you get cash, be careful. @wcbs880 pic.twitter.com/z6NlAXJge6

The money looks realistic, although it the right corner it reads “motion picture use only.”

“$103 million in counterfeit cash was passed in the U.S. and they say it’s likely to go up 25 percent this year because of this fake movie money,” Schumer said.

The blue water mark is in place and Ben Franklin is on the bill, but if you look in the right corner, it reads Motion Picture Use Only. It’s the same font used for United States of America. @SenSchumer wants internet retailers to stop selling the funny money. @wcbs880 pic.twitter.com/mcNvUR2Ti6

The senator wants online retailers like Amazon to stop selling the fake bills. He’s asking the Internet Association to force them to stop.

A spokesman for the Internet Association tells WCBS 880 that they look forward to working with Schumer to better understand his concerns.