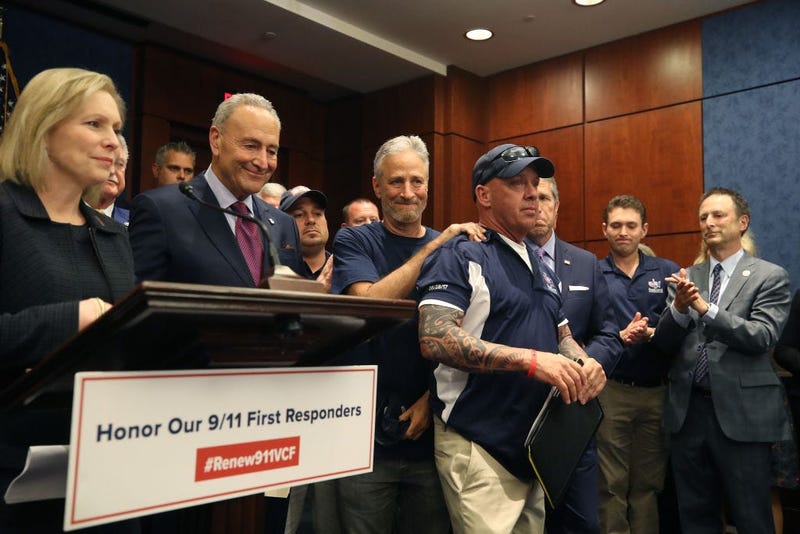 WASHINGTON (WCBS 880) — The Senate on Tuesday overwhelmingly voted to approve a bill that would replenish and make permanent the 9/11 Victim Compensation Fund.

FDNY firefighters and other advocates traveled to Washington, D.C., ahead of the 97-2 Senate vote and Sen. Kristen Gillibrand, of New York, acknowledged their efforts while denouncing Paul and Lee's amendments.

“The people in the gallery above us, these brave men and women who have suffered unbelievably, will not have to come here again,” Gillibrand said.

For months, first responders and advocates have been urging Congress to vote to extend the fund, especially after New York City officials announced that 200 FDNY firefighters have died from 9/11-related illnesses. They have often been joined by comedian Jon Stewart, who addressed reporters after the vote, joking "I think we can all agree I'm the real hero."

Members of Congress have also been fighting for years to allocate funding for victims of the Sept. 11, 2001 terror attacks, including New Jersey Sen. Bob Menendez – one of the original authors of the James Zadroga 9/11 Health and Compensation Act, which established the compensation fund.

In an interview with WCBS 880’s Steve Scott on Tuesday, he noted that it’s been a journey from the early days of the legislation to the final passage in the Senate.

“I made a commitment to our 9/11 heroes that, one, I'd never forget their service and their sacrifice and, two, I would have their backs as they had ours on that fateful day,” Menendez said. “Today's passage of the permanent funding for the 9/11 Victims Compensation Fund is part of fulfilling that commitment and it's about time.”

He adds that he’s certain President Trump will sign the legislation into law.

“The heroes who rushed to action during our city’s darkest hour put their lives on the line to protect their fellow Americans. It’s an extraordinary service and one deserving of our nation’s never-ending gratitude," the mayor said in a statement. "With the passage of the permanent authorization of the Victim Compensation Fund, no first responder or survivor will have to worry about receiving the support they deserve. On behalf of the people of New York, I am extremely grateful to Senators Schumer and Gillibrand, Representatives Nadler and Maloney, and the entire New York delegation, as well as the responders, survivors, and activists for their resolve and for leading the charge to pass this bill.”

Gov. Andrew Cuomo applauded the Senate for passing the bill.

"In New York and across the nation we will never forget the pain and suffering caused by the terrorist attacks on September 11," Cuomo stated. "Our duty is to support the heroes who ran toward danger that day and the weeks that followed and who are still suffering from the negative health effects of those horrific events."

"The health and safety of these brave men and women has been hanging in the balance for too long, and it's time they are finally given the peace of mind we owe them," he added.

Weeks ago, the bill that would renew the fund for another 70 years, essentially making it permanent, was also overwhelmingly approved in the House.

The legislation then faced even more trouble as Sen. Rand Paul, of Kentucky, rejected a bid for a unanimous consent agreement in the Senate and Sen. Mike Lee, of Utah, placed a procedural hold on the bill.

At the time, Paul said he was concerned about the bill’s effect on the national deficit. Meanwhile, Lee wanted to ensure the fun was given proper oversight to prevent fraud and abuse.

The two Republicans are introduced two amendments to the bill but both did not meet the required 60 "yes" votes needed to pass.

Just before the Senate voted on the legislation, Gillibrand said that if passed, the bill would be a message “that we are representing people in all 50 states, that the Senate will live up to the words they have said over and over again, ‘Never forget.’”