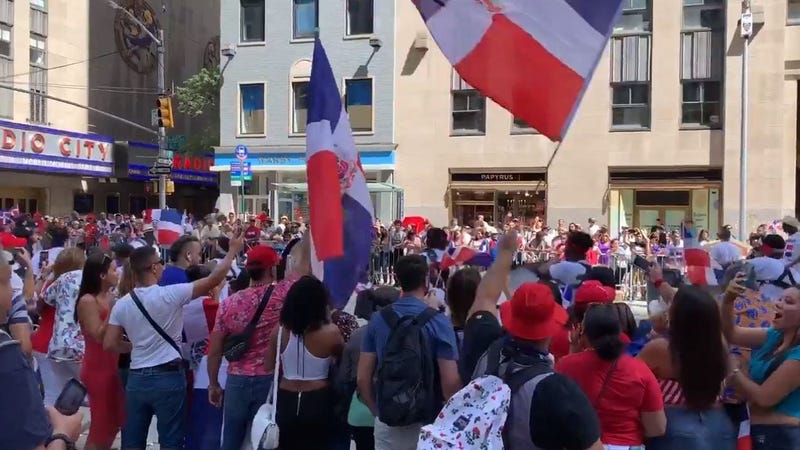 NEW YORK (WCBS 880) -- All the exuberance of Dominican culture was on full display along Sixth Avenue at the Dominican Day Parade.

The parade of dancers, floats and merengue music stretched nearly 20 blocks between 36th and 52nd streets on Sunday.

The parade has a padrino and madrina—godfather and godmother—instead of grand marshals. This year, it was costume designer Emilio Sosa and TV host Charytin Goyco.

“That’s what we are—family. We don’t know each other, but we’re family,” one paradegoer said of the atmosphere.

It might not be NYC’s biggest parade, but it is probably the loudest. #dominicandayparade going up 6th Ave @wcbs880 pic.twitter.com/yJOBEAYe9z

It brought a sense of pride and togetherness for Dominican Americans, many of whom live right here in the five boroughs.

“For me it’s unity,” an attendee said. “In one world where everybody is separate, this means we want to be together.”

Proud to be Dominican and honored to represent my people at the National Dominican Day Parade! #DominicanDayParade2019 pic.twitter.com/whAVfMbcTn

And they were more than happy to share that with anyone who stopped by to see the parade.

“My favorite part is to see people from different cultures coming and try to be with us and share the music and everything we have going on,” a woman said.