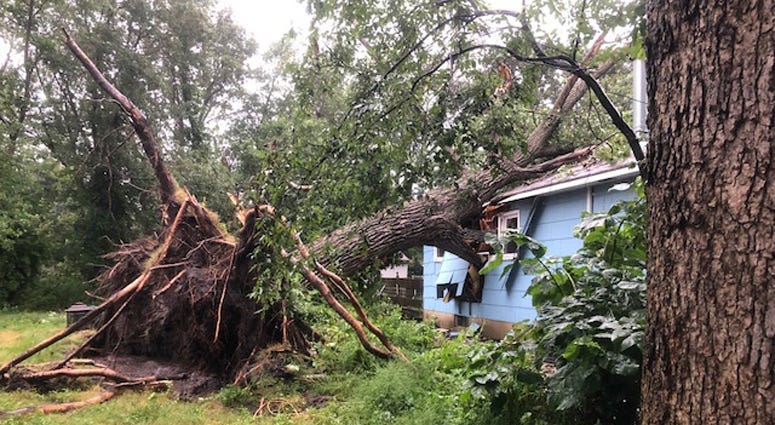 NEW YORK (WCBS 880) — Powerful thunderstorms broke the heat as they rolled into the Tri-State area late Monday evening, but also toppled trees, knocked out power to hundreds of thousands and turned roadways into rivers.

The storms packed wind gusts of 60 to 70 mph as they pummeled New Jersey. In Howell, two fallen trees sliced into homes and several more fell on vehicles.

"Definitely heavy rain, heavy wind. I wouldn't say that it was a tornado, but the way that the tress are snapping and breaking, it was a very strong cell that came through here," Police Chief Andrew Kudrick told WCBS 880's Sean Adams.

On Tuesday morning, 9-1-1 calls continued to flood into police headquarters, which itself was on a backup generator.

The chief says he has had a difficult time early on getting a hold of JCP&L. "I'm not gonna give them any type of accolades on this one due to the fact of the run around that we have been given," Kudrick said.

At the height of the storm, more than 300,000 power outages were reported across the Garden State alone.

Gov. Phil Murphy in a statement late Monday said the utilities were working to restore power quickly but that the effort "may take up to several days for some customers."

PSE&G said it is working around the clock to get power back on to customers. As of 10 a.m. Tuesday, the utility said crews had restored power to approximately 185,000 customers.

“We have extra crews, storm support personnel and over 500 mutual aid workers responding to get everyone back as quickly and safely as possible,” said Jack Bridges, PSE&G vice president for electric operations. “Heavy winds caused large trees to fall on power lines and tree crews have been called in to assist. We have additional supplies on-hand, including poles, transformers and other pole-top equipment.”

If customers are experiencing an outage, they can report it at outagecenter.pseg.com.

We're continuing our prep for the anticipated weather that could bring heavy rain and wind 2 our area this evening. We have extra crews and storm support personnel available 2 address any weather-related outages and service techs 2 respond to Worry-Free air conditioning calls.🌨️ pic.twitter.com/4TLGj0r9HL

In New York City, Con Edison was working to restore power to thousands of customers in Brooklyn and Queens after a controlled outage Sunday afternoon.

Amid the outages in New York City, Mayor Bill de Blasio announced the city has set up a command post for the city’s Office of Emergency Management and have 21 light towers out in affected areas.

Over 200 additional NYPD officers will be out to patrol streets and direct traffics as well.

We’ve deployed:
- An @NYCEmergencyMgt Command Post
- 200 NYPD officers and personnel to patrol streets and direct traffic
- 21 light towers with 50 on standby
- An emergency shelter for anyone in need

The storms also caused a ground stop at all area airports, including JFK, Newark and LaGuardia, and flooding throughout parks of Brooklyn and Queens.

Videos posted to Twitter showed cars stranded in intersections that had flooded and some parked cars beginning to float as the water levels rose.

At 4th Ave and Carroll Street in Brooklyn. Courtesy of Adrienne Zhao pic.twitter.com/wEU4RFwqfQ

One video even showed a man swimming across a flooded street in Williamsburg.

"Just all of a sudden it became a river and I got stuck," said one driver who's car got stuck in the water on Prime Avenue in Huntington Village. "I think it's seized hopefully it's not for the garbage."

The superintendent of a nearby coop complex said the area is known for flooding.

"We have had hundreds of cars stuck on this block in the last several years. Why people try to navigate through it I don't know but it never changes," he said. "They fixed it in the last five years or so, it goes down more quickly, but it doesn't stop it from flooding."

A few years ago WCBS 880's Sophia Hall spoke with a man who was driving through the flooded street in a brand new Maserati. He lost his brand new car as a result.

In Connecticut, major flooding forced Tweed-New Haven Airport to cancel flights through Tuesday afternoon and a lightning strike set fire to a dorm at Choate Rosemary Hall in Wallingford. Students were evacuated to an athletic center on campus.