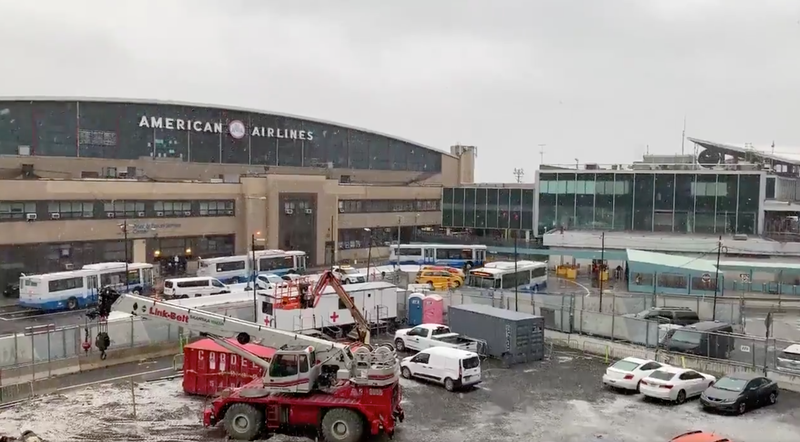 NEW YORK (WCBS 880) – Travel delays are snowballing as a winter storm hits the East Coast on what the airline industry is calling the busiest air travel day in history.

Flight-tracking site FlightAware says there were more than 745 canceled flights Sunday in the U.S., compared with 407 on Saturday. Delays reached 4,999 nationwide.

More than 450 flights had been delayed at Newark Airport by Sunday evening and more than 100 had been canceled, according to FlightAware.

More than 350 flights were delayed at LaGuardia and more than 30 were canceled.

At JFK Airport, more than 275 flights were delayed and at least nine were canceled.

Shantalle got off her plane at LaGuardia Sunday afternoon and wasn’t pleased to see the winter storm had followed her.

“I just came from Colorado, where they just had a huge blizzard there, and now I’m coming to New York and it looks like I’m walking into the same thing,” she said. “I would’ve stayed.”

She said she's thankful her flight only had a short delay.

Delays are...snowballing here at LaGuardia. FlightAware says the average delay here is over an hour, 2.5 hours at Newark, on what the airline industry says is its busiest travel day ever @wcbs880 pic.twitter.com/nliTCKXbxW

But that wasn't the case for everyone as delays stacked up on not just a busy travel day—but the busiest travel day ever in the sky, according to the airline industry. Some 3.1 million people are heading home by plane after the long Thanksgiving weekend.

Many people who WCBS 880 reporter Steve Burns spoke with said they had some sort of delay, but most weren't more than a half-hour or so.

For travelers whose delays weren’t too bad, the challenge was finding a way out of the notoriously crowded LaGuardia Airport during a winter storm.

“I’m waiting for my ride. I don’t know where he is. I think he’s probably lost because of this,” one man said.

Some airlines like United, Delta and American are offering to do away with their change fees and are encouraging people to extend that long weekend by another day or two.

The storm is expected to bring inches of snow, sleet, ice and rain through Monday.