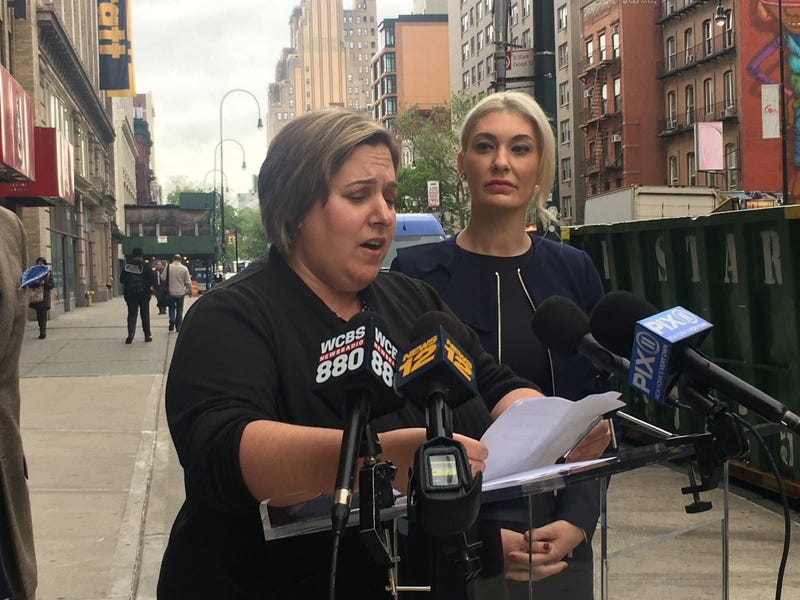 NEW YORK (WCBS 880) — A former high ranking officer in the Salvation Army has been accused of sexually assaulting his adopted daughter for years in the 1990s.

Nicole Sprout says the abuse began at age 11 after her mentally ill mother was unable to care for her and sent her to Lieutenant Gary Crowell and his wife Carol Beth, commanding officers of the Salvation Army Corps in East Northport.

“I was 13 to 16-years-old when full sexual contact and intercourse occurred,” Sprout said Tuesday in front of the Salvation Army headquarters in Manhattan.

When the abuse became public, the couple was transferred to Old Orchard Beach Corps in Maine, where Carol Beth remains a youth director.

“I lose sleep over knowing that Gary and Carol Beth Crowell have never been held accountable and that the Salvation Army was so instrumental in covering up their secrets,” Sprout said.

Twenty years later, Sprout, who is now a mother of three, says Crowell contacted her through Facebook to apologize and seek her forgiveness.

“I take full responsibility for my actions, and have for a very long time. I recall, as though it happened yesterday, the night I had to put into words my actions and the first time I had to accept what I had done,” Crowell wrote to Sprout.

In the lengthy message, which was released by her attorney, Crowell said he sought professional counseling and has been removed from his ministry.

According to attorneys, in his apology, Crowell admitted that he had disclosed his abuse to higher ranking officials within the Salvation Army, but the officials allegedly did not report the incident to authorities as required by law.

John Manly, an attorney for Sprout, said they are now making public the allegations to hold the Salvation Army accountable.

“If you have names of credibly accused predators, and we know they do, disclose them publicly so people will know. Stop hiding this,” Manly said outside the 14th Street headquarters.

They are calling for the organization to release a full list of possible offenders.

“I call upon the Salvation Army to release the names of all officials and employees credibly accused of child sexual abuse to district attorneys and attorney generals throughout the United States,” Sprout said.

She said she publically released Crowell’s message because “this goes beyond me and an apology. I just want to make sure that this isn’t happening to other people.”

The Salvation Army has yet to return a request for comment.