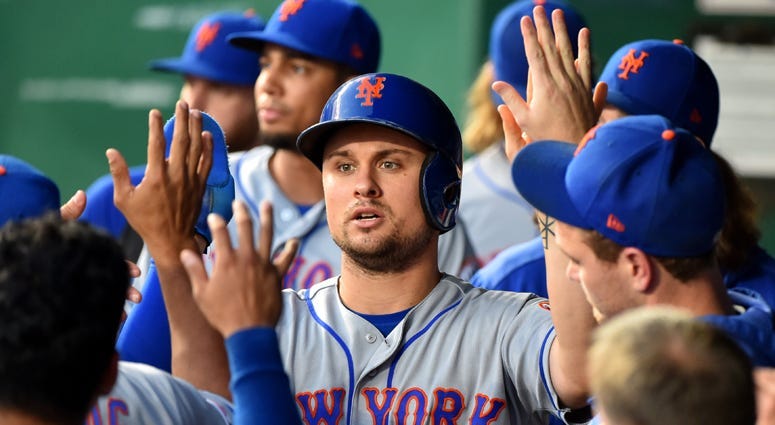 Could this year’s Mets acquisition of J.D. Davis from the Astros become one of the top trades in club history?

Some Met trades contributed to world championships or World Series trips, while others involved some of their best players ever coming or going. The list may surprise you. In inverse order, below is our Top 15.

15. May 22, 1998: Mike Piazza from the Marlins for Preston Wilson, Geoff Goetz an Ed Yarnall. While Piazza is the best Mets position player ever and arguably the game’s top offensive catcher in history, he was a salary dump by Florida, making this more like a free agent signing, ranking it lowest on this list.

13. Feb. 2, 2008: Johan Santana from the Twins for Carlos Gomez, Philip Humber, Kevin Mulvey and Deolis Guerra. Injuries eventually faded his greatness after a debut 16-7 season with a National League leading 2.53 ERA and 234 innings, but ending the Mets no-hitter drought in 2012 against the Cardinals forever etched the stylish Santana in franchise lore.

12. Nov. 2, 1972: Felix Millan and George Stone from the Braves for Gary Gentry and Danny Frisella. Keying the late 1973 Mets wakeup call and near-World Series upset of the A’s dynasty were Millan, who choked way up for a .290 average and just 22 strikeouts in 153 games, and Stone, a One Hit Wonder with a 12-3 record, 2.80 ERA, while Gentry’s career was injury-shortened and Frisella suffered one of baseball’s oddest deaths ever in a dune buggy accident.

11. Dec. 17, 2012: Noah Syndergaard, Travis d’Arnaud, John Buck and Wuilmer Becerra from the Blue Jays for R.A. Dickey and Josh Thole. Usually listed higher elsewhere, this deal ranks below the acquisitions of Ron Darling or Sid Fernandez, whose Mets body of work was longer than Thor’s so far, plus d’Aarnaud was one of the club’s biggest flops ever.

9. Apr. 1, 1982: Ron Darling and Walt Terrell from the Rangers for Lee Mazzilli. It was hard surrendering Mazzilli, a star and matinee idol on bad Mets teams, but Terrell was solid and Darling became one of the franchise’s best starting pitchers ever, with at least 14 wins in five of his seven seasons, including 15-6, 2.81 ERA in 1986.

8. Feb. 7, 1979: Jesse Orosco from the Twins for Jerry Koosman and Greg Field. Koosman threatened to retire if not dealt home to Minnesota, while then-WPIX sports anchor Jerry Girard quipped, “The Mets today traded their best lefty ever for 20-year-old Jesse Orosco; in a few years you’ll see a big sign: ‘Orosco’s Plumming,’ before the lefty closed in 1986 and his 1,252 appearances became baseball’s most ever.

7. July 31, 2015: Yoenis Cespedes from the Tigers for Michael Fulmer and Luis Cessa. Cespedes carried the Mets to the 2015 postseason with 17 HRs and 54 RBIs in 57 games, but proving again you can’t fully judge trades for a few years, after sizzling starts both he and Fulmer have plummeted and been injury riddled.

6. Apr. 5, 1972: Rusty Staub from the Expos for Ken Singleton and Mike Jorgensen. While Singleton later became a great Oriole, Staub was Mets legend, fueling their 1973 World Series run, becoming their first player with at least 100 RBIs (105) in ‘75, returning as one of the game’s best pinch hitters ever in the early ‘80s, plus tireless charity work.

5. June 15, 1969: Donn Clendenon from the Expos for Steve Renko, Kevin Collins, Jay Carden and Dave Colon. Clendenon was the original version of Cespedes, an in-season spark with 12 HRs and 72 RBIs in 72 games, culminating with three homers and winning World Series MVP against the Orioles.

3. Dec. 10, 1984: Gary Carter from the Expos for Hubie Brooks, Mike Fitzgerald, Herm Winningham and Floyd Youmans. Carter had just two great Mets offensive seasons before his knees failed, 32 HRs, 100 RBIs in 1985 and 24 HRs, 105 RBIs in ‘86, but he put the team’s return to glory over the top, epitomizing their championship swagger.

2. June 15, 1983: Keith Hernandez from the Cardinals for Neil Allen and Rick Ownbey. Carter was the final piece for 1986, but Hernandez was a better Met longer, batting at least .309 from ‘84-‘86 with more walks than strikeouts each of those years, and leadership skills ex-teammates still rave about.

1. Nov. 27, 1967: Gil Hodges from the Washington Senators for Bill Denehy. To quote Chris Rock, “That’s right, I said it!” Does it get any better than the Mets dealing a pitcher with a 1-10 career record for a manager who followed his borderline Hall of Fame playing career as a Brooklyn Dodger by piloting the 1969 World Champions?