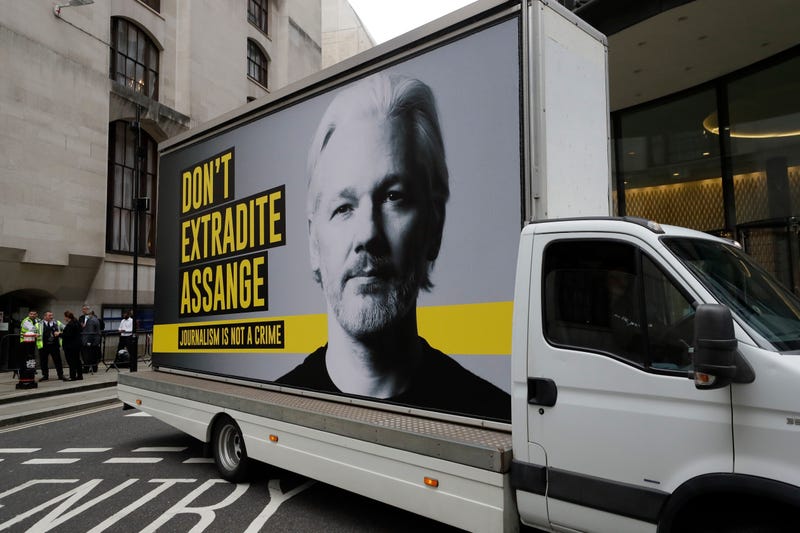 Photo credit A billboard truck depicting Julian Assange drives past the Central Criminal Court Old Bailey in London, Tuesday, Sept. 8, 2020. Lawyers for WikiLeaks founder Julian Assange and the U.S. government were squaring off in a London court on Monday at a high-stakes extradition case delayed by the coronavirus pandemic. American prosecutors have indicted the 49-year-old Australian on 18 espionage and computer misuse charges over Wikileaks' publication of secret U.S. military documents a decade ago. The charges carry a maximum sentence of 175 years in prison. (AP Photo/Kirsty Wigglesworth)
By The Associated Press

LONDON (AP) — A British judge told WikiLeaks founder Julian Assange on Tuesday that his extradition hearing will proceed without him if he continues to speak from the dock and interrupt witnesses.

Assange is fighting an attempt by American prosecutors to extradite him to the U.S. to stand trial on spying charges. U.S. prosecutors have indicted the 49-year-old Australian on 18 espionage and computer misuse charges over WikiLeaks’ publication of secret U.S. military documents a decade ago. The charges carry a maximum sentence of 175 years in prison.

Assange’s lawyers say the prosecution is a politically motivated abuse of power that will stifle media freedom and put journalists at risk around the world.

Addressing Assange, the judge said: “You will hear things, no doubt many things, you disagree with during these proceedings.”

“If you interrupt proceedings it is open to me to proceed in your absence,” she added.

On Monday, when the hearing opened, Baraitser rejected requests by Assange’s lawyers to delay his extradition hearing until next year so they can have more time to respond to U.S. allegations that he conspired with hackers to obtain classified information.

The case has already been delayed for months because of the coronavirus pandemic.

American authorities allege that Assange conspired with U.S. army intelligence analyst Chelsea Manning to hack into a Pentagon computer and release hundreds of thousands of secret diplomatic cables and military files on the wars in Iraq and Afghanistan.

In a new indictment announced in June, the U.S. Justice Department expanded its case, accusing Assange of recruiting hackers at conferences in Europe and Asia, recruiting a teenager to hack into the computer of a former WikiLeaks associate and conspiring with members of hacking groups known as LulzSec and Anonymous. U.S. prosecutors say the evidence underscores Assange’s efforts to procure and release classified information.

Assange’s lawyers argue that he is a journalist entitled to First Amendment protection and say the leaked documents exposed U.S. military wrongdoing.

The case is due to run until early October. The judge is expected to take weeks or even months to consider her verdict, with the losing side likely to appeal.