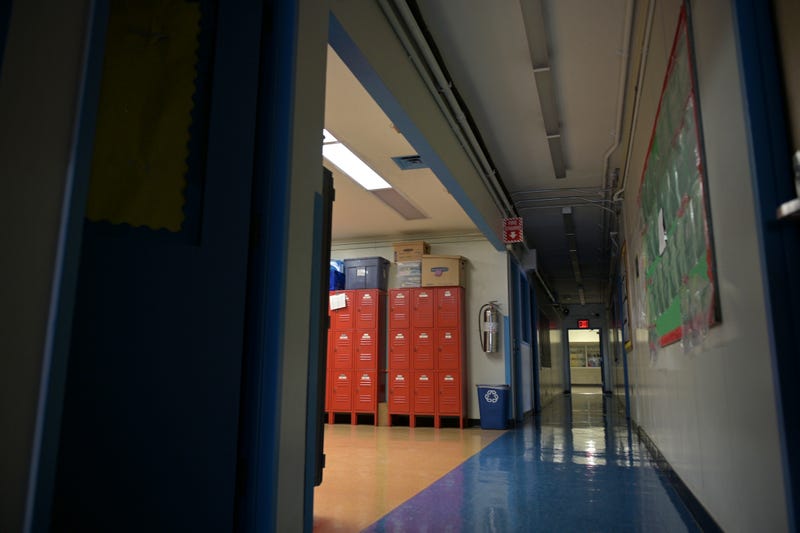 A hallway is empty with most of the lights off on what would otherwise be a blended learning school day on November 19, 2020 at Yung Wing School P.S. 124 in New York City Photo credit Michael Loccisano/Getty Images
By Kristie Keleshian and Adam Warner

NEW YORK (WCBS 880) -- Council member Joe Borelli and Staten Island parents are suing in federal court to reopen public schools shuttered by the city amid a spike in the COVID positivity rate.

Borelli said Saturday that he and the parents were seeking an emergency injunction to reopen schools, which pivoted to all-remote learning on Thursday after the city’s seven-day positivity rate hit a 3% threshold.

“Mayor de Blasio and Chancellor (Richard) Carranza have continued to fail our children time and time again. Even though they had six months to prepare for this school year, they failed to do so and our children are forced to pay the price,” Borelli said in a statement announcing the lawsuit.

“Remote learning has proven to be a failure and now they have taken the extra step of closing the schools completely. This is utterly irresponsible and unacceptable,” the Republican councilman said.

Last night, we filed our 2nd lawsuit in an attempt to keep in-person learning @ #NYC schools. The DOE has done a good job, yes a good job!, keeping children & staff safe in school buildings & the medical & scientific consensus is that schools are not super spreaders. pic.twitter.com/s00Bj2sCSD

The lawsuit, filed in Manhattan federal court on Friday night, is the second lawsuit by Borelli and parents. Last month, they filed a class action lawsuit against the Department of Education in Richmond County Supreme Court in a bid to bring back in-person learning full-time.

“The consensus amongst the CDC, the World Health Organization, UNICEF, a dozen peer-reviewed academic journal articles and most health departments of foreign states and foreign governments—all agree that schools are safe,” he said. “If you are still closing schools down, you are acting outside of science, and the harm that you’re doing on children is not worth the risk of getting coronavirus.”

Borelli said he sees the new lawsuit as opening another front in an otherwise long battle to get students back to in-person learning.

“DOE is actually doing a fantastic job keeping children safe in school by their own metrics and their own studies and their own contact tracing. And it is a shame that they put that all aside just to appease a few ‘corona Karens’ who want to keep schools closed,” the councilman said.

Borelli said the closure of schools will only exacerbate disparities among students within the school system.

“It’s going to be the children who are not well-off who are the ones who suffer and who are delayed and who see their reading and education levels suffer,” Borelli said. “The system is going to be perpetuated by a chancellor who made his whole career here based on restoring equity to public school students.”

The newly filed lawsuit will have its first hearing within the next 10 days.

De Blasio has said he hopes to reopen schools as soon as possible with new safety protocols in place but that the city had an obligation to stick with the 3% positivity benchmark it set for temporarily closing schools.