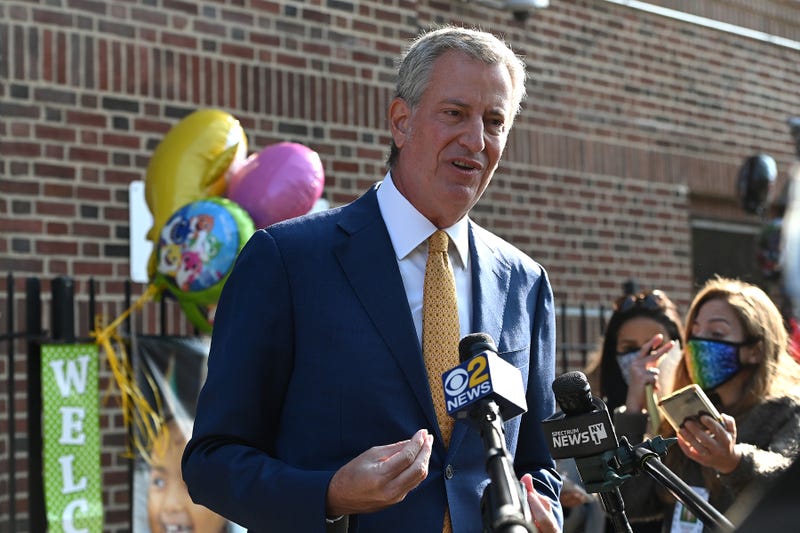 The mayor pointed to a series of reports the city has received of U.S. Immigration and Customs Enforcement officers calling themselves police officers, detectives or members of a “narcotics squad” in order to gain access to homes or make immigration arrests.

“Clearly stated, the NYPD does not want ICE agents stating or implying that they represent the NYPD,” de Blasio wrote in a letter to Tony Pham, the acting head of ICE. “Such behavior negatively affects the public safety mission of the NYPD and erodes trust in our communities.”

The letter from de Blasio comes after agents detained Fernando Santos-Martinez in Harlem this week.

On Thursday morning around 6 a.m., agents claiming to be NYPD officers with the 34th Precinct knocked on Santos-Martinez's door, according to Council Member Ydanis Rodríguez.

“Someone who has been living in New York City for the last 30 years, raising his family, paying his taxes,” Rodríguez said.

Rodríguez, who lives right around the corner, said Santos-Martinez’s partner answered the door. She believed the agents were the NYPD, so she gave them his number. Santos-Martinez was later detained by ICE agents at the deli where he works.

“It’s unacceptable. It’s illegal,” said Rodríguez, adding that the state should call for an investigation.

Santos-Martinez is currently in an ICE lockup in New Jersey. He’ll face a judge on Oct. 19.

Earlier this year, ICE took the city to court after the de Blasio administration balked at “immigration subpoenas” it received from the government, seeking information about a handful of inmates wanted for deportation. The city ultimately provided limited details about the inmates, even as it derided the subpoenas as a “political stunt.”

The action reflected ICE’s mounting frustration with jurisdictions that do not honor deportation “detainers” or provide any details about defendants going in and out of local custody.

De Blasio added in his letter that “New York City remains the safest big city in America in large part because of NYPD’s work to ensure that victims and witnesses of crime feel safe coming forward.”