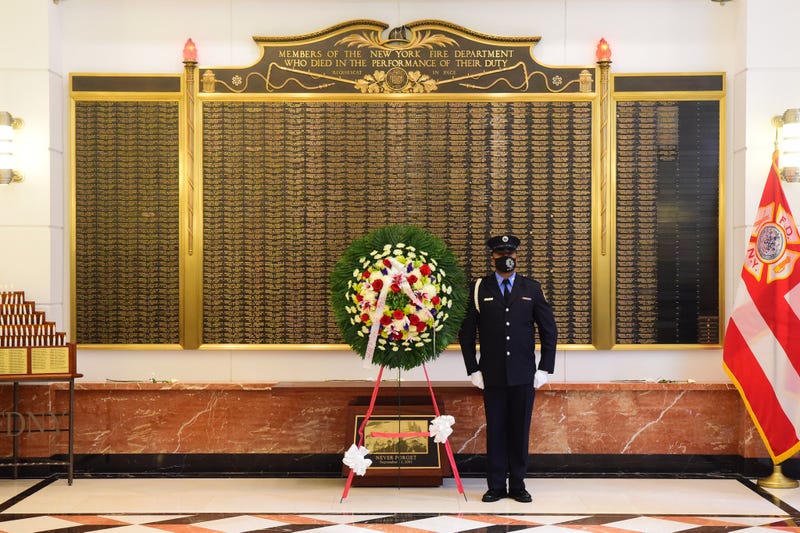 An FDNY fire fighter stands in front of the memorial wall honoring those who died in the line of duty on Sept. 11, 2020. Photo credit New York City Fire Department
By Sean Adams

NEW YORK (WCBS 880) — The family of an FDNY captain, who died decades ago after fighting a major fire in Queens, is demanding his name be added to a memorial wall honoring those who died in the line of duty.

Richard Meister says he never knew his grandfather, FDNY Captain Hans Meister, but he’s heard plenty of stories about the impact he had on other members of his family.

“My dad slept under the coffin for the first two nights of my grandfather lying in state at the family home,” Meister said.

The FDNY captain died in 1943, five days after battling a massive warehouse fire at the Diesel Electric Company in Long Island City.

“The next day, he had a mild cough, the day after it got worse.
He said it was like he had something in his lungs that he couldn't clear,” Meister said of his grandfather.

At the time of his death, Captain Meister’s death was not linked to the fire. But, the family is convinced he suffered from acute respiratory distress.

For 23 years, the family has been asking the FDNY to declare that Captain Meister died in the line of duty.

Former Judge Edward McCarty, with the firm Vishnick, McGovern and Milizio, has taken up the case pro bono.

“We are starting to draft up the legal papers to do what is known as an Article 78 in the Supreme Court in Brooklyn, which will compel the fire department to recognize his sacrifice,” McCarthy said.

Captain Meister was four months away from his pension when he died, which his family did not receive; but, his grandson says the family doesn't want any money.

“We’d like his name to be on the wall with the other firefighters and members of the FDNY who suffered line of duty deaths,” Meister said.