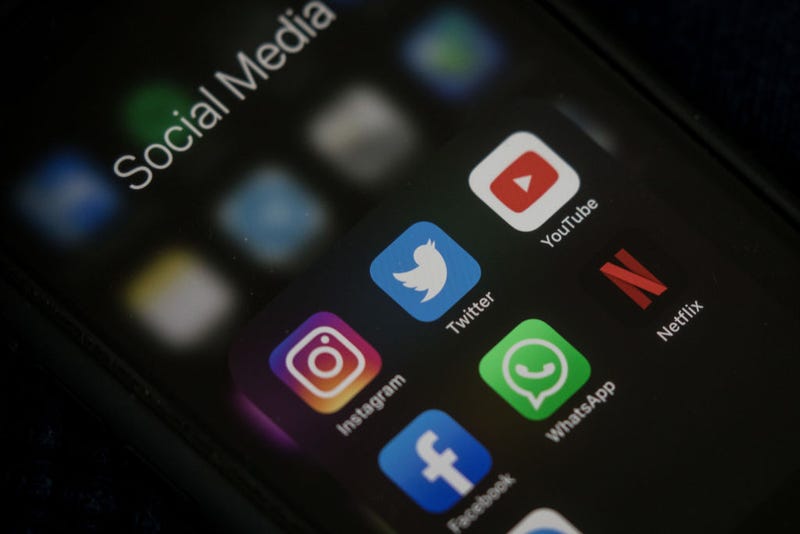 In this photo illustration, social media apps are seen on a mobile phone on July 29, 2020 in Istanbul, Turkey. Photo credit Chris McGrath/Getty Images
By Mack Rosenberg

While some say the bans violate free speech, others say social media companies are private and can do what they want.

Though, one thing that everyone has learned during this debate is that most social media platforms have user bases that can be larger than some countries and most companies are still not sure as to how they can properly monitor everyone.

WCBS 880’s Mack Rosenberg spoke with CNET’s editor at large Ian Sherr, who says he’s not surprised about the Trump bans, but thinks the decisions are a little too late.

“There's been a lot of criticism of Facebook, Twitter, YouTube – you name them – over the way that they've handled harassment and hate campaigns and all this type of stuff on their services, not the least of which President Donald Trump, who often violated their terms of service and would have been kicked off the platform much earlier if he wasn't president of the United States,” Sherr said.

He notes the successes of social media in removing terrorists and posts aimed at child exploitation but, until they come up with a more concrete solution in preventing the posts from going live, they will continue to have a problem.

“The line has been moving – the line in the sand, where they say, ‘enough is enough,’” Sherr said.

And the CNET editor says the new line has caused real world harm, such as the riots at the U.S. Capitol Building.

“Nobody really seems to have come up with very many answers for how to handle it,” Sherr said. “You look at Facebook and Twitter and YouTube and they say, ‘Well we support regulation.’ They've gotten to that point where the CEOs say, ‘Well we'll support something.’ But they don't propose very many ideas.”

His solution is to create a non-governmental body of independent regulators, with no connection to the social media websites, that would monitor the platforms.

“These types of decisions need to be made by someone who isn't driven by profit motive and isn't driven by the internal politics of these companies,” he said. “You can say, ‘Well, (social media companies are) trying to do their best.’ Sure. Well, they've failed.”

Sherr is also in favor of repealing Section 230 of the Communications Decency Act, which currently shields companies from liability for what is posted on their platforms.

He wants to take power away from Apple, Google, Facebook, Twitter and other big tech companies and give it to a group of individuals that have no connection to the government or the companies, who will try to fix the issues that are currently plaguing the sites.

While some say it’s impossible for one group of people to monitor every single post made on every social media platform, Sherr says technology is advancing every day and artificial intelligence is one major tool in accomplishing the goal.