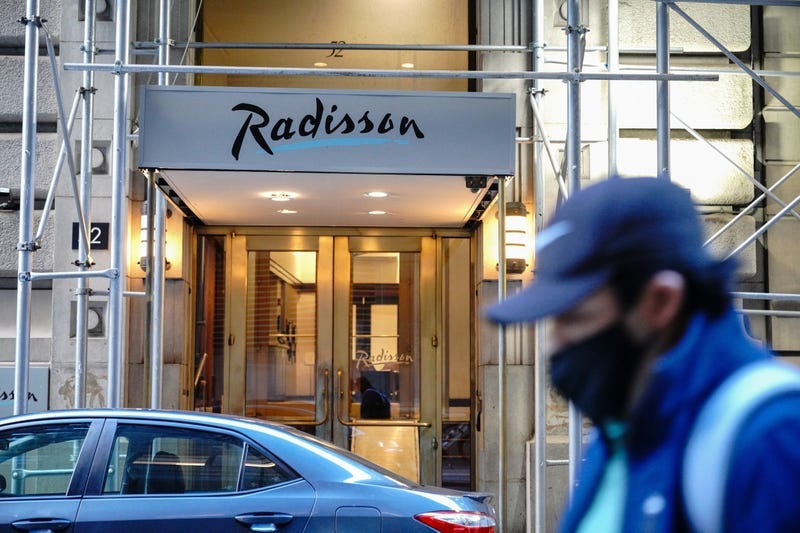 A person wearing a face mask walks past a former Radisson Hotel at Wall street that were converted to homeless shelter. Photo credit John Nacion/SOPA Images/LightRocket via Getty Images
By WCBS 880 Newsroom

NEW YORK (WCBS 880) -- A judge ruled Friday that the city can move 240 homeless men to a Lower Manhattan hotel after a group of residents sued to try to stop the plan.

The men had been staying at the Lucerne Hotel on the Upper West Side for months in a bid to stop the spread of the coronavirus in shelters. But their presence caused an outcry there over the summer, with residents complaining of drug use, harassment and other quality-of-life issues.

Facing potential legal action, Mayor Bill de Blasio announced last month that the men would be moved from the Lucerne to a hotel in the Financial District.

When residents downtown got word that the men would be staying at the Radisson Hotel on William Street, a local group, Downtown New Yorkers, sued the city to stop the move.

In its lawsuit, Downtown New Yorkers said it opposed what it called “(the city’s) misguided attempt to exploit the COVID-19 emergency by hastily moving forward with the proposed transfer to cover up for their public relations disasters, which began when they mishandled the movement of the men to the Lucerne Hotel Shelter.”

The decision to move the men to the Radisson was “a response to protests on the Upper West Side, not to protect the public health,” the suit claimed.

A city Law Department spokesperson told the Post after the ruling: “We welcome the court’s decision not to interfere with the judgment of the city to move forward. Now residents can get services onsite and be closer to medical care.”

James did permit the suit to continue however, setting another court hearing on Nov. 16.