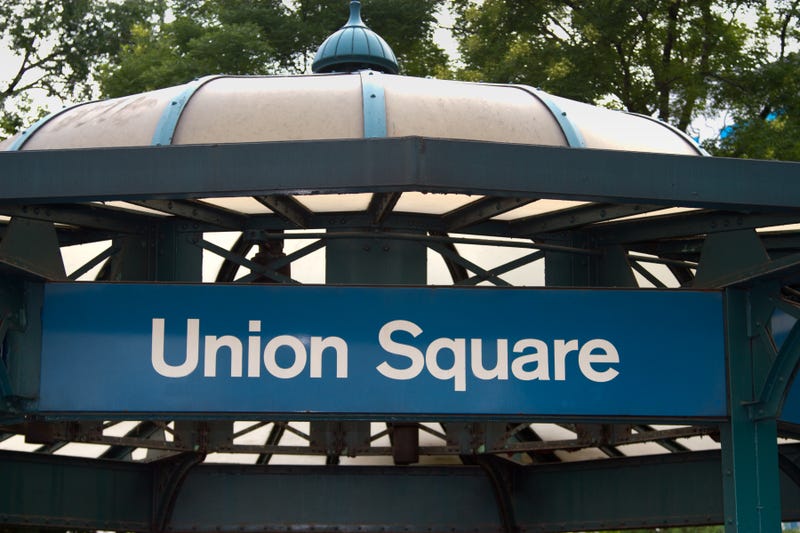 NEW YORK (WCBS 880) — A woman is lucky to be alive after a man pushed her in front of an oncoming subway train in Union Square on Thursday morning.

The victim, who is in her 40s, was shoved into the path of a northbound No. 5 train as it was pulling into the station around 8:30 a.m.

The woman managed to escape with minor injuries.

"She fell, fortunately for her, between the roll bed and the rails," NYPD Transit Chief Kathryn O'Reilly said.

The suspect, who was described as emotionally disturbed, was immediately taken into custody without incident.

A suspect was immediately taken into custody after a vicious and unprovoked assault at 14th St Union Sq - This is an ongoing investigation- Please expect train delays on the 4/5/6 lines and if you witnessed this incident please reach out to us at 800-577-TIPS pic.twitter.com/DuqY0Ho1Hl

Authorities do not believe the suspect and victim previously knew each other.

"The perpetrator had no contact with the victim, there were no words exchanged," O'Reilly said. "The whole incident is captured on surveillance video. It's very disturbing. We see him waiting, calculating for the train to approach the station. And at the opportune moment, he pushed the victim to the tracks."

Subway service was delayed in the morning, but has since been restored.

The incident came less than 24 hours after a 36-year-old man was pushed onto the subway tracks at Bryant Park.

In that case, police said the victim was waiting for the downtown B/D train around 7 p.m. Wednesday when was approached by a man who asked him for money.

WANTED: Help us identify this assault suspect who pushed a man to the tracks at the 42nd St / Bryant Park subway station yesterday around 7pm- Please ☎️ @NYPDTips at 800-577-TIPS with any information (call 888-57-PISTA for Spanish) pic.twitter.com/QMZ2HtLTkt

Police said when the victim refused to hand over cash, the suspect punched him in the face and shoved him onto the tracks before fleeing the station on foot.

The victim was treated at a local hospital for minor injuries to his knee and hands.

New York City Transit Interim President Sarah Feinberg says the trend of people being pushed or jumping onto tracks is a real issue.

She notes that when somebody is experiencing a mental health emergency in the transit system, there isn’t many resources available to help them.

When asked what she would like to see the city do, she notes that she does not necessarily have a plan, but she would like an agency that is better equipped to handle a mental health emergency to step in.

“I'm not a medical expert, I'm not a doctor, I'm not at a mental health expert but I know that the answer is not to just let people be out of sight, out of mind, Feinberg said. “Just because our system does run underground and because once you enter the system, it might be hard for people on the street to see you, doesn't mean that that should be a haven for people who are experiencing real significant trauma and trouble.”

She adds: “Whether the city needs to add more social workers to the payroll, whether the Department of Homeless Services needs to step up, you know, these folks need real-time help, and our staff, our personnel are responsible for moving trains safely and cleaning stations and operating buses and we can't also be providing social services.”