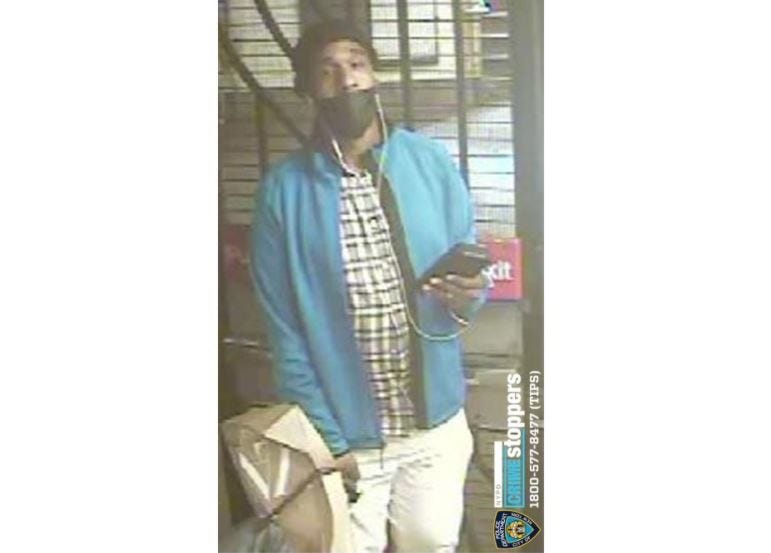 Suspect wanted by police in connection to a random slashing aboard an A train on Nov. 21, 2020 Photo credit NYPD
By Erica Brosnan

NEW YORK (WCBS 880) — Police are looking for a man who allegedly slashed a subway passenger in the face in a seemingly random attack.

The incident happened on Saturday, Nov. 21 at around noon at the High Street subway station in Brooklyn, according to authorities.

Police say a 26-year-old man was aboard a northbound A train, en route to High Street, when an unidentified man approached him and slashed him with a sharp object.

The two did not have any contact before the slashing occurred.

The 26-year-old victim suffered lacerations to the face and detrained at the station to report the incident to police.

The attacker fled the train and the subway system at the station.

EMS transported the victim to Methodist Hospital where he was treated for his injuries and released.

Police released surveillance photos of the suspect fleeing the station.

Anyone with information in regard to this incident is asked to call the NYPD's Crime Stoppers Hotline at 1-800-577-TIPS (8477) or for Spanish, 1-888-57-PISTA (74782). The public can also submit their tips by logging onto the Crime Stoppers website at WWW.NYPDCRIMESTOPPERS.COM, or on Twitter @NYPDTips.