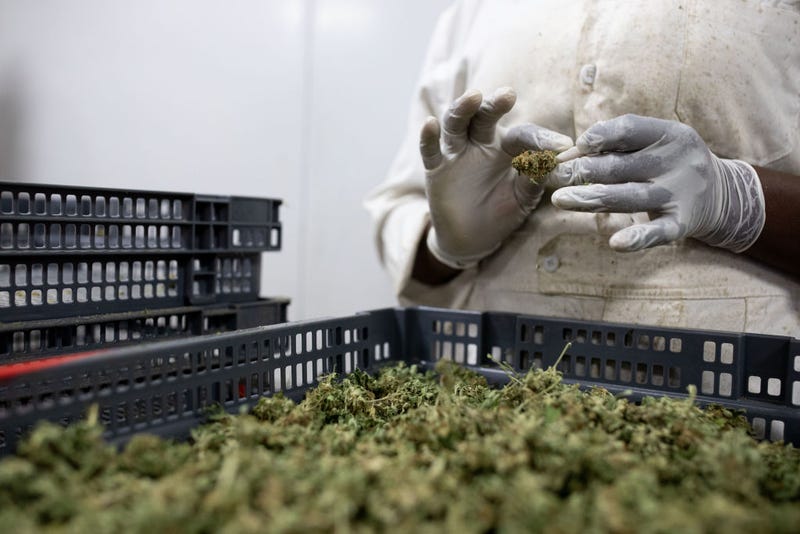 A factory worker processes Cannabis flowers to make them ready for export on November 10, 2020 in Kasese, Uganda. Photo credit Luke Dray/Getty Images
By WCBS 880 Newsroom and The Associated Press

The bill was signed into law by the governor just hours after the Democrat-led Assembly and Senate passed the last-minute measure to ease penalties on underage possession of the drug.

The two chambers had previously sent legislation to be signed by Murphy in December, but he refused to sign it amid concerns that young people of color could still face arrests, running afoul of his goal of undoing the effects of the war on drugs in Black communities.

The legislation signed Monday now makes underage possession of alcohol and marijuana subject to a written warning on the first offensive. Further violations will escalate to include a parental notification and a referral to community services.

Currently, underage drinking in the state of New Jersey is punishable by a fine of up to $1,000 and up to six months in jail.

Part of the legislation makes it so towns will no longer have the authority to enact ordinances with civil penalties or fines concerning underage possession or consumption violations on private property, among other measures. It also increases the liability for suppliers of cannabis items to underage people by making a third or subsequent violation a petty disorderly persons offense.

We now have laws that will:
✅Usher in a new industry based on equity
✅Reinvest dollars into communities
✅Promote both public health and public safety

It’s a new dawn in New Jersey, and I am proud that we did this together.

Under the legislation setting up a recreational marketplace for cannabis, the state can apply a 6.625% sales tax to all marijuana sales. A total of 70% of the proceeds generated by that tax will then be distributed to areas of New Jersey disproportionately affected by marijuana-related arrests.

Individual towns can also levy a tax of up to 2% under the measure.

Also under the bill, the Cannabis Regulatory Commission will be able to levy an excise tax, the amount of which will depend on the cost per ounce of cannabis. There will be four levels of tax under the bill, so if cannabis is $350 or more, the tax per ounce will be $10. That rises to $60 per ounce if the retail price of the product is less than $250.

As our new cannabis marketplace begins to take shape, businesses will be formed, and jobs will be created.

Starting immediately, those who had been subject to an arrest for petty marijuana possession will be able to get relief and move forward.

The number of licenses for cultivators will be set at 37 for two years. The state Senate was pushing for no limits, but the Assembly wanted the caps.

The decriminalization measure is necessary because the state’s laws make possession a crime, despite the voter-approved amendment, according to lawmakers. The measure passed with broad bipartisan support.

There is still no legal way for people to buy weed. Murphy said it will take around six months for the state to set up the dispensary marketplace. Home grow is still against the law in the Garden State.