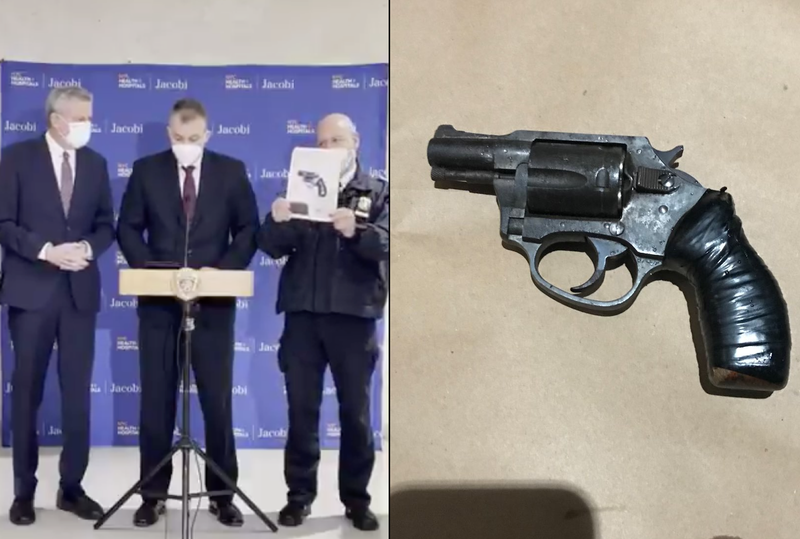 NEW YORK (WCBS 880) — An NYPD officer was shot and injured in the Bronx on Tuesday night but is expected to make a full recovery, officials said.

The 31-year-old officer was driving through the Soundview section of the Bronx around 10:29 p.m. as part of the Gun Violence Suppression Division.

WATCH as @NYCMayor and @NYPDShea provide an update on the officer who was shot down in the Bronx earlier this evening. pic.twitter.com/oczhp8owWD

Members of the division encountered a 24-year-old man near Lafayette Avenue and White Plains Road and initiated a stop, NYPD Commissioner Dermot Shea said at a press conference, adding that all information was preliminary.

“In the course of seconds, what we know, is that our officer we believe fired one round. We believe the perpetrator fired four rounds, and during that exchange of gunfire, our officer was struck what we believe is one time in the lower back below his bulletproof vest,” Shea said.

The officer, who has been with the department six and a half years, was taken to NYC Health + Hospitals/Jacobi.

We’re extremely lucky that we’re not mourning the loss of a NYC police officer tonight — a blessing we count all too often these days.

Tonight’s events are another terrifying reminder of the dangers your cops face every day as they try to rid NYC streets of gun violence. https://t.co/PDfi4DsIwd

“I can tell you that he is in a lot of pain, but thankfully we expect him to make a full recovery,” Shea said.

Shea, Chief of Patrol Juanita Holmes and Mayor Bill de Blasio visited the officer and his family at the hospital.

“Tonight, we saw extraordinary bravery, extraordinary bravery,” de Blasio said. “Here is a young officer out there on the streets of the Bronx getting guns off the streets to save lives. That’s what he does. He’s someone who goes out and puts his life on the line to protect other people in the most powerful way—by depriving criminals of their firearms. An extraordinarily brave officer, the kind of officer we depend on to be safe in this city.”

De Blasio said the officer was "in good spirits" despite the pain he was in. A number of the officer's relatives have served in the NYPD, according to officials.

Police Benevolent Association Patrick Lynch, who was also at the press conference, voiced his frustration, saying that gun violence is up 100% since last year.

This is the firearm the suspect had in his possession when our officers engaged with him. pic.twitter.com/MpVrXWMmwH

Police said a firearm was recovered at the scene and that an investigation into the shooting is ongoing. The suspect was taken into custody and was not injured, according to multiple reports.

The suspect has several arrests in New York City and a criminal record in New Jersey, according to Shea.

In a tweet, Shea wrote: “We’re extremely lucky that we’re not mourning the loss of a NYC police officer tonight—a blessing we count all too often these days.”

There was a heavy police presence at the scene of the shooting and the NYPD issued a tweet urging the public to avoid the area.

ADVISORY: Please avoid the area of Lafayette Avenue & White Plains Road in the Bronx due to an ongoing police investigation. Expect emergency vehicles and traffic in the area. More information when available. pic.twitter.com/vCsOrOK56R

A cop was shot in the Bronx this evening, police said. The officer was struck in the back and is expected to survive. @NYCMayor is en route to Jacobi Hospital where the officer was transported by fellow officers. https://t.co/HP4ZDTWB0c pic.twitter.com/emJ1mQ6jAP

Crime Scene NYPD Officer appears to be holding a uniform and a vest outside of Jacobi Hospital in the Bronx.
NYPD officer was shot in the back in the Bronx and is expected to survive.