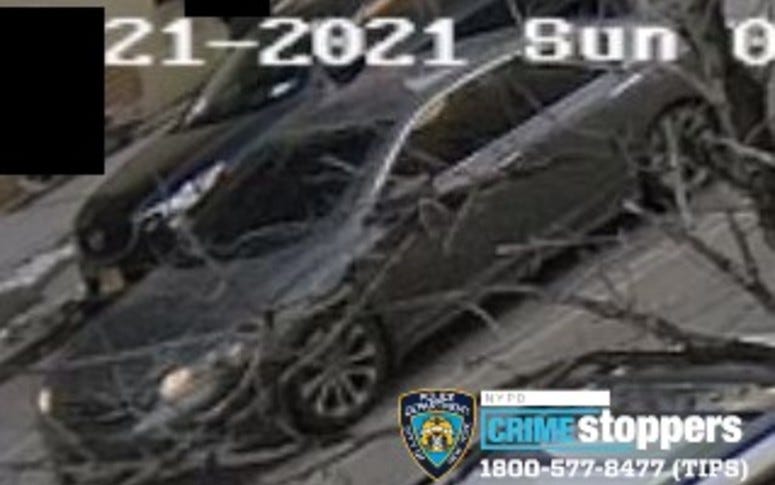 The vehicle of two gunmen who shot a driver during a dispute in Manhattan on Sunday, Feb. 21, 2021 Photo credit NYPD
By WCBS 880 Newsroom

NEW YORK (WCBS 880) — Police are searching for the man who allegedly shot a driver during an apparent road rage incident in Manhattan.

The incident was reported to police on Sunday just after 5 p.m. in the vicinity of West 162nd Street and Fort Washington Avenue in Washington Heights.

According to police, a 39-year-old motorist was driving in his vehicle in the area when he got into a verbal dispute with two unknown men inside a gray sedan.

The verbal dispute, however, quickly turned physical when the two men inside the sedan stepped out of the vehicle, with at least one revealing a firearm, police said.

The man with the gun shot the 39-year-old victim at least once, striking him in the arm and causing pain and bleeding, according to the NYPD’s report.

Authorities say the victim was able to flee the scene in his vehicle and transported himself to Harlem hospital in stable condition.

Police say the two men fled the location to parts unknown in their vehicle. They are described as being between 20 and 30 years old.

A surveillance photo of their vehicle was released by police, who are asking for the public’s help in identifying the men.

Anyone with information in regard to this incident is asked to call the NYPD's Crime Stoppers Hotline at 1-800-577-TIPS (8477) or for Spanish, 1-888-57-PISTA (74782). The public can also submit their tips by logging onto the CrimeStoppers website at WWW.NYPDCRIMESTOPPERS.COM, on Twitter @NYPDTips. All calls are strictly confidential.