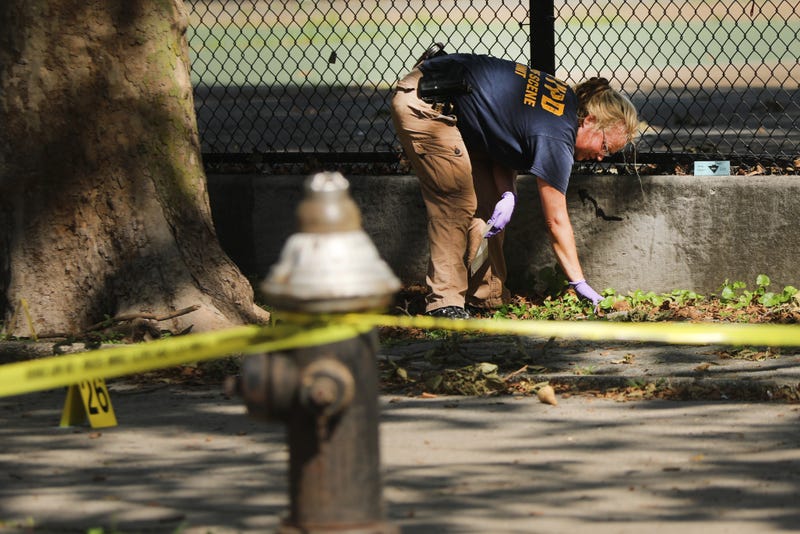 Police work at a crime scene in Brooklyn where a one year old child was shot and killed on July 13, 2020 in New York City. Photo credit Spencer Platt/Getty Images)
By Erica Brosnan

NEW YORK (WCBS 880) — Shootings dramatically increased over the last 11 months in New York City, to levels that haven’t been seen in years, the NYPD announced Friday.

While overall crime remained flat in the month of November, shootings increased yet again, this time by 112%.

"The year so far has presented significant public safety challenges with gun violence continuing to afflict New Yorkers across the city. As shootings continued their upward trajectory in November, citywide shooting incidents through the first eleven months of 2020 surged to levels unseen in years," the department said in a statement.

For the year, shootings have risen 95% as compared to the same time last year. Over the last 11 months, there has been 1,412 shootings.

Gun arrests for the month of November were up 112.3% when compared to the same time last year.

However, the NYPD says 40% of those accused of a shooting have had a past gun possession arrest and 21% of shooting victims this year have also had one.

Police officials say violent crime and homicides have also risen for the month and the year.

In November, 28 people were murdered in the five boroughs, five more than in November 2019. Overall, there’s been a 38% increase in the number of murder victims in 2020.

Hate crime, however, did drop by 37% for the year, despite the coronavirus pandemic sparking a number of hate crimes against the Asian population in early 2020.

The NYPD says police continue to work hard every single day to protect the lives of everyday New Yorkers.

"Whatever the challenge, our NYPD officers have shown innovation and determination to get the job done this year," Police Commissioner Dermot Shea said. "Our work to reimagine the kind of policing New Yorkers deserve is always evolving, in line with our agency's best traditions to reflect the needs of everyone in our city."