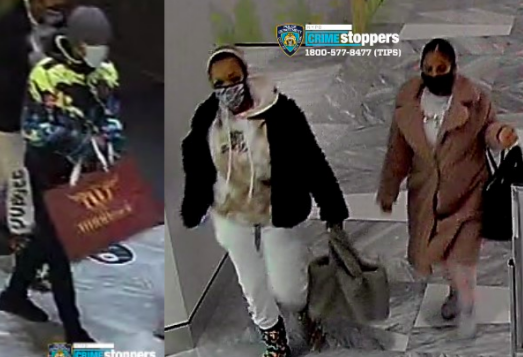 A trio of thieves who allegedly stole a $5,000 purse from a Dior store in Manhattan. Photo credit NYPD
By WCBS 880 Newsroom

NEW YORK (WCBS 880) — A group of thieves made off with a purse valued at $5,000 from a Dior store in Hudson Yards earlier this month, police said.

The incident was reported to police at the luxury store located at 20 Hudson Yards around 6:20 p.m. on Feb. 6.

According to police a man and two women entered the store and quickly snatched the purse, which is valued at $5,000 from one of the shelves.

The three quickly fled the store to parts unknown on foot.
It remains unclear if store employees pursued the thieves.

The NYPD has released photos of the suspects and is asking for the public’s help in identifying the trio, who are described as being between the ages of 20 and 30.

Anyone with information in regard to the identity of the male is asked to call the NYPD's Crime Stoppers Hotline at 1-800-577-TIPS (8477) or for Spanish, 1-888-57-PISTA (74782). The public can also submit their tips by logging onto the CrimeStoppers website at WWW.NYPDCRIMESTOPPERS.COM or on Twitter @NYPDTips.