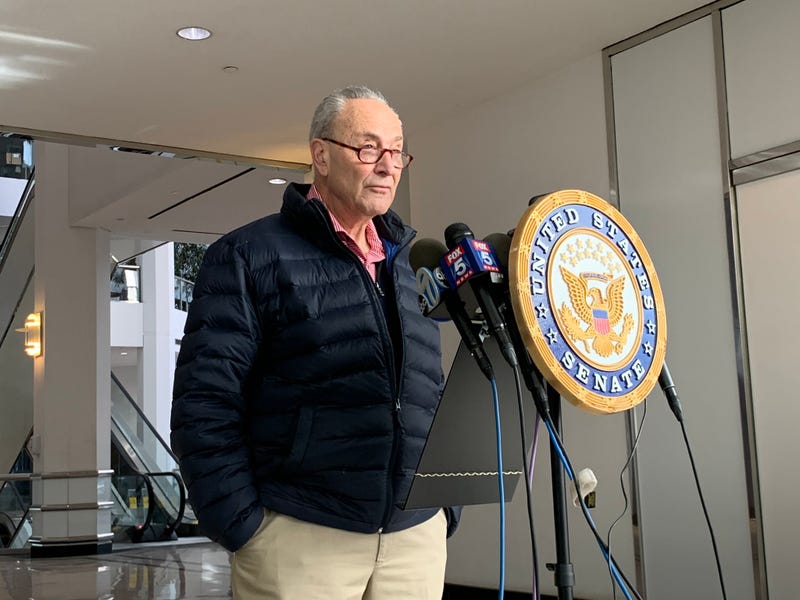 NEW YORK (WCBS 880) – Newly minted Senate Majority Leader Chuck Schumer is laying out a busy schedule for the Senate over the coming weeks, including the impeachment trial, $1.9 trillion in COVID relief and the confirmation of President Joe Biden’s cabinet picks.

“The Senate must advance all three in the next few weeks, and we will,” Schumer said in midtown Manhattan on Sunday.

He said he has no choice but to hit the ground running as the new Senate majority leader.

“In the next three weeks, we will be doing three things, all of which are very much needed,” the Democrat said, adding that “the stakes are too high to delay any of them.”

First up will be starting the impeachment trial of former President Donald Trump. Impeachment proceedings will formally begin Monday.

“The House managers will come to read the articles of impeachment at 7 p.m. on Monday,” Schumer said.

But then proceedings will be put on hold for two weeks, during which time Schumer said the Senate has other pressing business.

“Approve a number of the president’s key appointments and advance the COVID relief bill,” he said.

Schumer still has yet to work out an organizing resolution with now Minority Leader Mitch McConnell. The two senators are reportedly hung up on the future of the filibuster, which necessitates a 60-vote threshold to pass most bills.

“Mitch McConnell will not dictate to the Senate what we should do and how we should proceed,” Schumer said. “We hope our Republican friends will see the need and work with us, but if not, we will get it done.”

Schumer said Democrats are looking at using a maneuver that allows them to pass budget-related bills with a simple majority. Vice President Kamala Harris would break any ties.

The impeachment trial is set to resume the week of Feb. 8.

“It will be fair, but it will move at a relatively fast pace,” Schumer said.