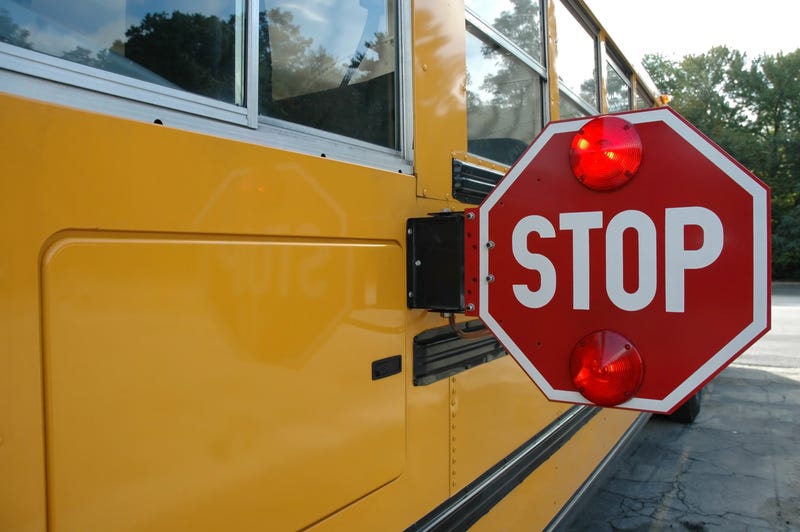 A stop sign mounted on the side of a yellow school bus. Photo credit Getty Images
By Sophia Hall

BAY SHORE, N.Y. (WCBS 880) — Traffic cameras will soon be mounted on the outside of school buses to catch those who illegal pass the vehicles while picking up children in Suffolk County.

In Bay Shore, school superintendent Joseph Bond has been pushing for the cameras – which are mounted to the buses’ stop arms – for months after an investigation revealed there are 90 to 100 drivers illegally passing stopped school buses every day.

“That’s 90 to 100 chances for one of precious students to be taken away from us,” he said.

Bond said passing a school bus while it is stopped and picking up or letting off children is reckless and puts lives at risk.

“Early in my teaching career, one of my students was struck by a car that illegally passed the school bus. Although Mike survived, he suffered significant injuries and had to be hospitalized for several months,” the superintendent said.

Around 6,000 buses will be equipped with the traffic cameras.

Any driver who illegally passes the bus while the stop arm is down will have their license plate photographed by the camera and they will be issued a $250 fine.

Suffolk County Police Chief Stuart Cameron is a big supporter of the change, saying children should not have to worry about being struck by a car when going home from school.

“Children, especially younger children, believe adults will obey the rules,” he said. “When they see a stop arm on the side of the bus, they believe everyone will stop and they may run across the street believing that and imperil themselves when someone does not obey.”

The program will likely begin in January 2021.