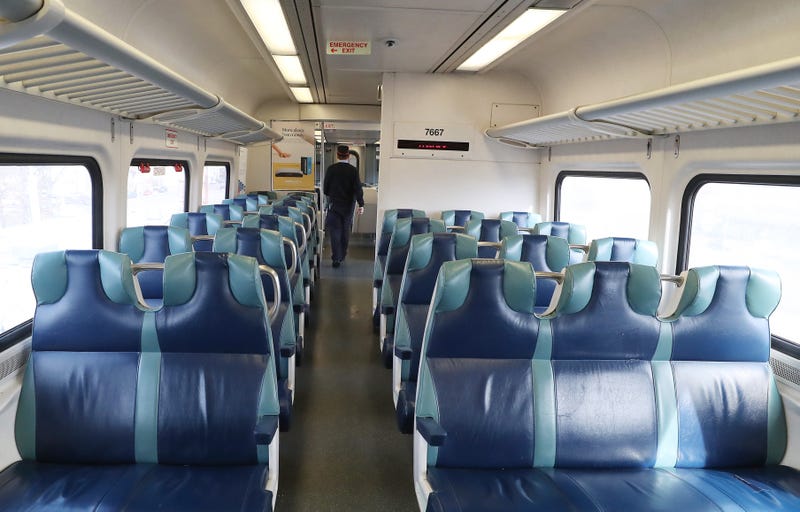 A train conductor walks through a near-empty car on the Long Island Railroad in March. Photo credit Al Bello/Getty Images
By Steve Burns

NEW YORK (WCBS 880) -- The MTA hasn’t seen as much success as it would’ve liked with some high-tech cleaning solutions on subways, buses and trains.

When they were announced back in May, new disinfectant solutions were said to be able to kill the virus for weeks after just one application.

“The antimicrobial, frankly, we are still looking at it. It has been somewhat disappointing on the duration issue,” Foye said.

An MTA official told Newsday that tests show the solution wearing off in as little as a day.

Foye also said the pilot using ultraviolet light to kill the virus is effective, it’s just not all that practical.

“There are concerns from an operating point of view about the time and cost it would take to do rolling stock, whether it's subway cars or Metro-North or the Long Island Railroad,” Foye said, adding that it might be put to better use in stations, perhaps by robots.

One project is showing some promise, Foye said. That’s the installation of advanced air filtration systems on the LIRR and Metro-North. He called the air exchange technology “quite promising.”

Developers said the advanced filters can kill 99.9% of airborne particles in trains.

music
Blake Shelton's optimistic about 2021, with new music and his wedding to Gwen Stefani on the way
music
These Rihanna photos from 'ESSENCE' are fine art and demand to be seen
music
Dua Lipa on strippers and selective feminism: 'Support women in all fields of work'
music
How Demi Lovato got Kesha obsessed with aliens
sports
Harden says goodbye to Houston: 'This city has given me everything I could ask for and more'
music
Lady Gaga's father supports Trump, and his daughter's performance at Biden's Inauguration