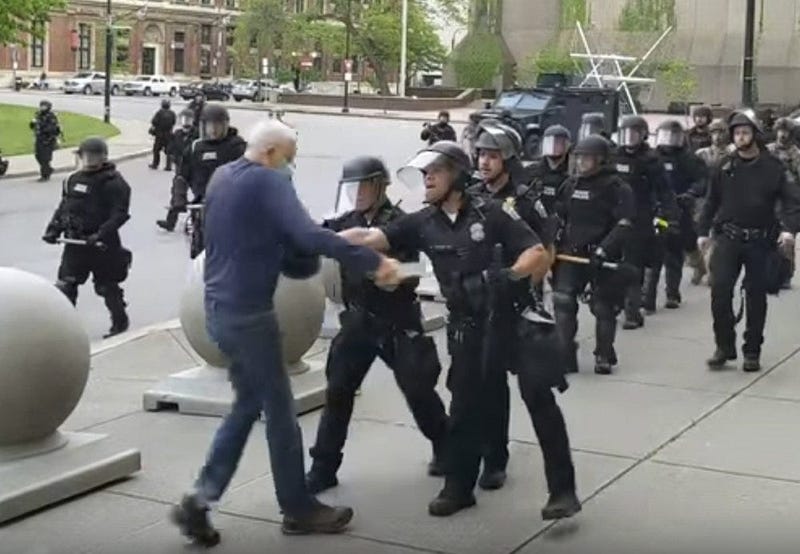 Photo credit Buffalo police officer appears to shove a man who walked up to police Thursday, June 4, 2020, in Buffalo, N.Y. Video from WBFO shows the man appearing to hit his head on the pavement, with blood leaking out as officers walk past to clear Niagara Square. Buffalo police initially said in a statement that a person “was injured when he tripped & fell,” WIVB-TV reported, but Capt. Jeff Rinaldo later told the TV station that an internal affairs investigation was opened. Police Commissioner Byron Lockwood suspended two officers late Thursday, the mayor’s statement said. (Mike Desmond/WBFO via AP)
By Mike Baggerman WBEN

Shortly after the arraignments of Buffalo Police Officers Robert McCabe and Aaron Torgalski, Erie County District Attorney John Flynn said he “believes” there is body camera footage, but did not definitively say yes because of an apparent technical issue with the body cameras around the time of the incident.

“Apparently, there is a problem with the cloud, not just here in Buffalo but apparently nationwide from law enforcement agencies who are using this same cloud,” Flynn said. “There’s a problem with downloading some of the video.”

The cloud is an evidence-management program used by law enforcement that stores video and audio of encounters. Axon, the company that makes, distributes, and stores footage for police departments, including Buffalo’s, said they are not aware of any issues affecting their customer’s ability to view video captured on body cameras between June 4 and June 6.

Flynn believes officers had their cameras on when the two officers pushed Gugino in front of Buffalo City Hall, resulting in Gugino falling and fracturing his skull on the sidewalk.

WBEN asked the Erie County District Attorney’s office if there was body camera footage of the encounter, though a spokesperson for the office could not comment because it relates to evidence.

If there is body camera footage, John Evans, President of the Buffalo Police Benevolent Association, believes it will help exonerate the two officers that face up to seven years in prison.

“When it gets broken down you might see he may have embellished or exaggerated the fall,” Evans said of the initial video seen millions of times. “I think that was his intention all along. I think it actually blew up on him. I don’t think he intended on falling as hard as he did. That’s just what I think. Once the video is broken down it will show a different story.”

Body cameras are in the spotlight after Atlanta Police released the body camera footage in the fatal officer-involved shooting of Rayshard Brooks earlier this week. Buffalo Police will not release the footage because it is an active criminal investigation.

The officer who shot and killed Brooks was charged with murder.

“It can’t do anything but enhance the situation,” Cambria said. “So far, they have pretty good video.”

Cambria suggested that a reason why Atlanta Police may have released the video was for crowd control. By releasing the video, it would not appear that police were hiding anything, therefore easing tensions.

“We’ve seen in many of these cases, one way or another that footage leaks out on social media or what have you,” Cambria said. “This way, the prosecution and the police have control over the media. They’re the ones that send it out, you would assume totally as opposed to parts of it.”

Releasing additional video could present some problems for prosecutors. Cambria said it could interfere with a jury and it is also a matter of ethics for a prosecutor.

“If a participant in a case, meaning a lawyer or police under their direction, they should not do or say something that could have an ultimate impact on the ultimate decision in their case,” Cambria said. “It may very well be they’re just doing this out of an abundance of caution not to affect the ethics rules.”

Though he also pointed out Erie County prosecutors have a history of not releasing footage publicly and that their habits have made it difficult for defense attorneys.

“We do not believe that any of the threats are credible but are not willing to take that chance,” Zarcone wrote.