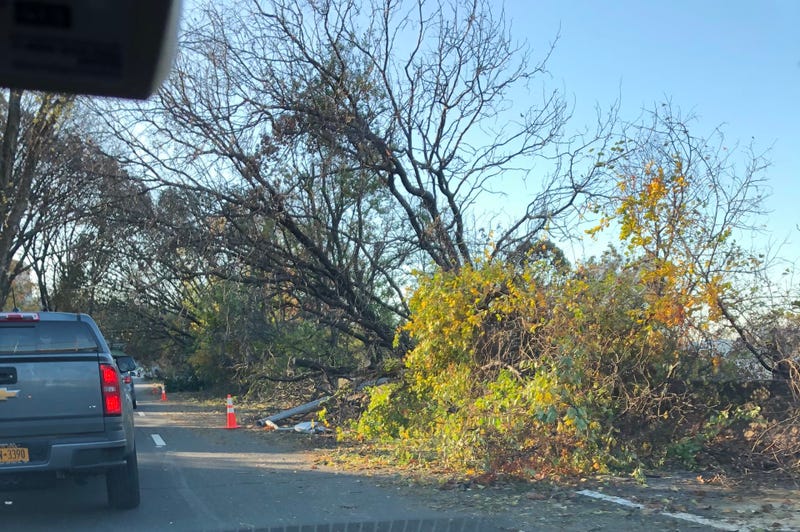 Thousands of customers were in the dark across New York City and Westchester on Monday morning.

On Long Island, there were just under 1,100 outages.

In Connecticut, Eversource said 23,000 customers were left without electricity.

"The combination of heavy rain saturating the ground and high winds that hit the state caused trees already weakened by the prolonged drought to come down, taking power lines with them and leaving thousands of customers without power especially in the western part of the state," said Eversource President of Regional Electric Operations Craig Hallstrom. "Our crews are working feverishly in communities affected by this storm to restore power as quickly and safely as possible. We realize how difficult it is to be without power, especially with many customers still working and learning from home during this unprecedented time, and we will work non-stop until every customer has their power restored."

In New Jersey, PSE&G reported more than 4,200 outages, with about half of them in Bergen.

"The winds kicked up, we had very high gusts," Picone said. "We had heavy rains. It lasted a short period of time but it did quite a bit of damage."

A wind gust of 70 miles per hour was registered in St. George, Staten Island.

Other areas experienced wind gusts of 50 and 60 miles per hour.

In Midtown, officials blocked off several streets following reports of broken glass falling from a building under construction at West 57th Street and 6th Avenue.

About 27,000 customers were without power in the Buffalo area, where photos shared by our sister station WBEN showed a gas station leveled from the winds on Route 5.

Quite the sight on Route 5. This gas station leveled from the winds. pic.twitter.com/CeS5wSjgkh

During the height of the storm, tornado warnings were triggered in Manhattan, the Bronx, Westchester and Suffolk County, although there is no indication that any twisters touched down.

Despite the widespread damage, there were no reports of any serious injuries.