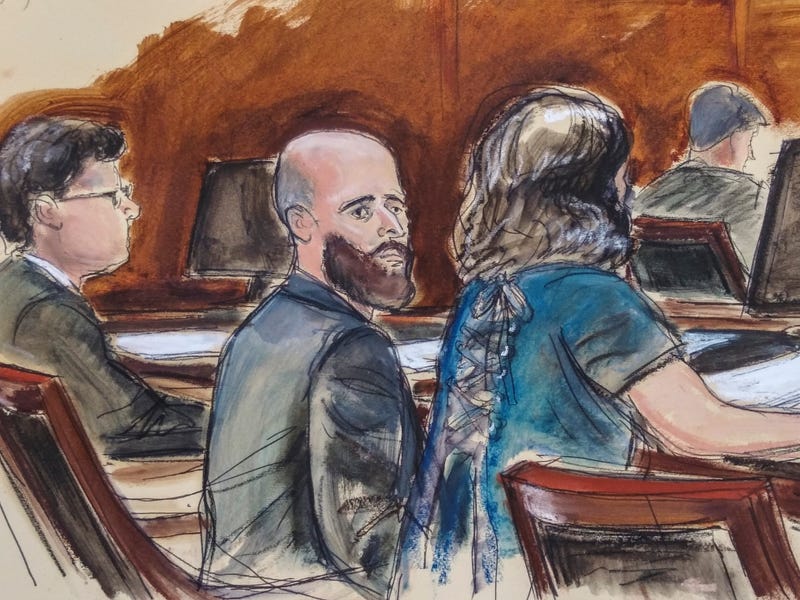 NEW YORK (AP) — A former CIA software engineer charged with leaking government secrets to WikiLeaks says it's cruel and unusual punishment that he's awaiting trial in solitary confinement, housed in a vermin-infested cell of a jail unit where inmates are treated like “caged animals."

Joshua Schulte, 32, has asked a Manhattan federal judge to force the federal Bureau of Prisons to improve conditions at the Metropolitan Correction Center, where he has been held for over two years under highly restrictive conditions usually reserved for terrorism defendants.

In court papers Tuesday, Schulte maintained he is held in conditions “below that of impoverished persons living in third world countries.”

“It is barbaric and inhumane to lock human beings into boxes for years and years — it is a punishment worse than death,” the court filing said.

A message seeking comment was sent to the Bureau of Prisons and the Department of Justice.

Last year, a jury deadlocked on espionage charges alleging that Schulte stole a massive trove of the agency’s hacking tools and gave it to the organization that publishes news leaks. He was convicted of lesser charges of contempt of court and making false statements.

He is scheduled for another trial on espionage charges in June in what was said to be the largest leak in CIA history involving classified information. Afterward, he faces a separate trial on child pornography charges. He has pleaded not guilty to all charges.

In his 20s, Schulte, originally from Lubbock, Texas, worked as a coder at the CIA’s headquarters in Langley, Virginia, where digital sleuths design computer code to spy on foreign adversaries.

The so-called Vault 7 leak published in March 2017 by WikiLeaks revealed how the CIA hacked Apple and Android smartphones in overseas spying operations and efforts to turn internet-connected televisions into listening devices. After a yearlong probe, investigators blamed Schulte, who had already left the agency after falling out with colleagues and supervisors and moved to New York City to work at a news agency.

At trial, a prosecutor called the leaks “devastating to national security." A defense lawyer said the materials could have been accessed and stolen by hundreds of people.

According to the court papers, Schulte has been in solitary confinement and not been outdoors in over two years under special administrative measures designed to severely restrict an inmate's communications and interactions with others.

Prosecutors say the measures are necessary after Schulte tried to leak even more classified information using a contraband cellphone that had been smuggled into the jail. They said he declared an “information war” and was “prepared to burn down the United States government.”

Schulte's filthy cell, the size of a parking space, is infested with rodents, rodent droppings, cockroaches and mold and there is no heating, air conditioning or functioning plumbing, the court papers said, while sunlight is blocked by a blacked out window. Television access is permitted for one hour per week.

The toilet operates so poorly that he lets feces partially dissolve before flushing, according to court documents, and temperatures fall so low that water in his cell turns to ice and he shivers despite wearing four sets of clothing, five sets of socks, two blankets and three sets of socks on his hands.

Bright lights are on nonstop, he isn't allowed outside recreation and his access to commissary and visitation is severely restricted, while his access to books or legal materials is banned or severely limited, along with visits to dentists or doctors, despite heart-related issues, Schulte maintained.

In his prison unit on the jail's 10th floor, silverware and cups are banned so “inmates are forced to eat and drink with their hands like the caged animals that they are," the filing said. Several men awaiting trial in cells nearby are charged in terrorism cases.

When he is moved outside his cell, he is “shackled from head-to-toe like Hannibal," the filing added, referencing the fictional Dr. Hannibal Lecter, a cannibalistic serial killer from the 1991 horror movie “The Silence of the Lambs."

Sabrina Shroff, one of Schulte's lawyers, said he was not exaggerating with his claims in a jail long derided by inmates as harsh for defendants awaiting trial.

“I think that everyone on Mr. Schulte’s defense team is horrified by the conditions in which he has to live daily," she said.

Schulte said he was asking for intervention from a judge because he had exhausted his opportunities to protest his conditions to prison authorities, who he says make it nearly impossible to lodge complaints. They insist on using 40-year-old cumbersome processes rather than updated electronic avenues, he said.

As an example, he cited a rejection of his complaints by the prison's Northeast Regional Office in part because he failed to use a ballpoint pen “to appropriately allow the carbon copies to be readable." The court papers said Schulte is denied the use of pens.