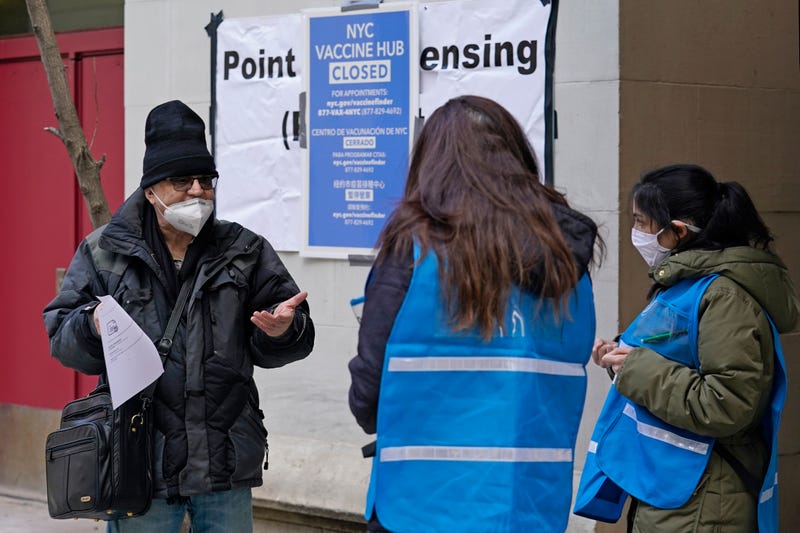 Public health experts Thursday blamed COVID-19 vaccine shortages around the U.S. in part on the Trump administration’s push to get states to vastly expand their vaccination drives to reach the nation’s estimated 54 million people age 65 and over.

The push that began over a week ago has not been accompanied by enough doses to meet demand, according to state and local officials, leading to frustration and confusion and limiting states’ ability to attack the outbreak that has killed over 400,000 Americans.

Over the past few days, authorities in California, Ohio, West Virginia, Florida and Hawaii warned that their supplies were running out. New York City began canceling or postponing shots or stopped making new appointments because of the shortages, which President Joe Biden has vowed to turn around. Florida's top health official said the state would deal with the scarcity by restricting vaccines to state residents.

The vaccine rollout so far has been “a major disappointment,” said Dr. Eric Topol, head of the Scripps Research Translational Institute.

Problems started with the Trump administration’s “fatal mistake” of not ordering enough vaccine, which was then snapped up by other countries, Topol said. Then, opening the line to senior citizens set people up for disappointment because there wasn’t enough vaccine, he said. The Trump administration also left crucial planning to the states and didn’t provide the necessary funding.

“It doesn’t happen by fairy dust,” Topol said. “You need to put funds into that.”

Last week, before Biden took over as president, the U.S. Health and Human Services Department suggested that the frustration was the result of unrealistic expectations among the states as to how much vaccine was on the way.

But some public health experts said that the states have not been getting reliable information on vaccine deliveries and that the amounts they have been sent have been unpredictable. That, in turn, has made it difficult for them to plan how to inoculate people.

“It’s a bit of having to build it as we go,” said Dr. George Rutherford, an epidemiologist at the University of California, San Francisco. "It’s a front-end supply issue, and unless we know how much vaccine is flowing down the pipe, it’s hard to get these things sized right, staffed, get people there, get them vaccinated and get them gone.”

Dr. Marcus Plescia of the Association of State and Territorial Health Officials was also among those who said opening vaccinations to senior citizens was done too soon, before supply could catch up.

“We needed steady federal leadership on this early in the launch,” Plescia said. “That did not happen, and now that we are not prioritizing groups, there is going to be some lag for supply to catch up with demand.”

Supply will pick up over the next few weeks, he said. Deliveries go out to the states every week, and the government and drugmakers have given assurances large quantities are in the pipeline.

The rollout has proceeded at a disappointing pace. The U.S. government has delivered nearly 38 million doses of vaccine to the states, and about 17.5 million of those have been administered, according to the Centers for Disease Control and Prevention.

About 2.4 million people have received the necessary two doses, by the CDC's count — well short of the hundreds of millions who will have to be inoculated to vanquish the outbreak.

Biden, in one of his first orders of business, signed 10 executive orders to combat the coronavirus pandemic on Thursday, including one broadening the use of the Defense Production Act to expand vaccine production. The 1950 Korean War-era law enables the government to direct the manufacture of critical goods.

He also mandated masks for travel, including in airports and on planes, ships, trains, buses and public transportation, and ordered the Federal Emergency Management Agency to set up vaccination centers and the CDC to make vaccines available through pharmacies starting next month.

Biden has vowed to dispense 100 million shots in his first 100 days.

“We’ll move heaven and earth to get more people vaccinated for free,” he said.

Florida was one of the first states to open vaccine eligibility to members of the general public over 65. Now uncertainty over the vaccine supply has prompted the state surgeon general, Scott Rivkees, to advise counties to prioritize available doses for state residents, including so-called snowbirds who live there part-time. People seeking vaccination will have to provide a driver’s license or other document, such as rental leases and utility bills.

In New York, Mayor Bill de Blasio and Gov. Andrew Cuomo have been pleading for more doses. Appointments through Sunday for the first dose of the vaccine at 15 community vaccination hubs set up by the city health department were postponed to next week.

Vaccinations in New York haven’t stopped, but demand for the shots now far exceeds the number of doses available, the mayor said.

“It’s just tremendously sad that we have so many people who want the vaccine and so much ability to give the vaccine, what’s happening?” de Blasio said. “For lack of supply, we’re actually having to cancel appointments.”

Rosa Schneider had jumped at the chance to make a vaccination appointment once she heard that educators like her were eligible in New York. A high school English teacher who lives in New York City but works in New Jersey, she said that a day before she was to be vaccinated on Wednesday at a city-run hospital, she got a call saying the supply had run out and the appointment was canceled.

“I was concerned, and I was upset,” said Schneider, 32, but she is trying daily to book another appointment. She is hopeful availability will improve in the coming weeks.

music
How Megan Thee Stallion is helping to rebuild Houston
sports
Tom Brady shatters another record with sale of rookie card
i'm listening
Camila Cabello is a woman changing the world: 'I know better so I can do better'
sports
Ranking the best and worst NBA All-Star jerseys of past 25 seasons
music
The cast of 'Grey's Anatomy' ranked by net worth
music
Watch our RADIO.COM LIVE Check In with Silk Sonic featuring Bruno Mars and Anderson .Paak