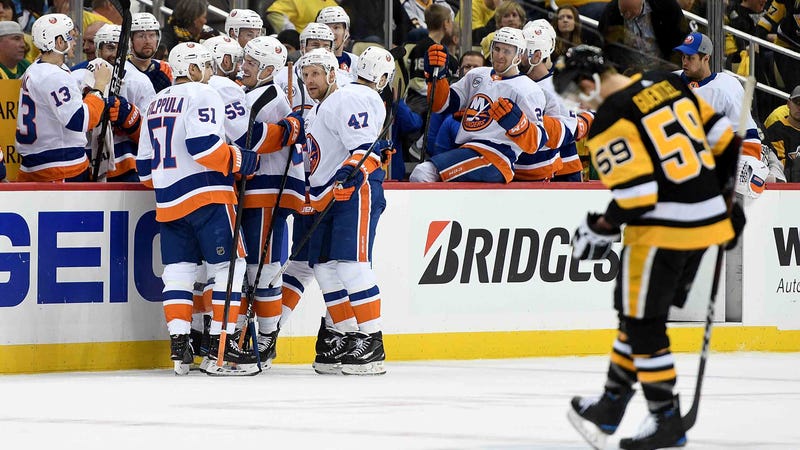 PITTSBURGH (93.7 The Fan) -- It's fairly easy, after Sunday afternoon's 4-1 loss here, to suggest reasons for the Pittsburgh Penguins' surprising 3-0 deficit in their first-round series against the New York Islanders.

Matt Murray being outplayed by Robin Lehner, especially after allowing a Jordan Eberle goal that deflated whatever momentum the Penguins had built upon scoring the opening goal. New York's special teams out-performing Pittsburgh's, especially in killing all five of their penalties over the last two games. The Islanders holding Sidney Crosby and Jake Guentzel completely off the scoresheet, especially now after doing so in Game 3 without the benefit of last change. The Penguins' proclivity for making mistakes, especially after Justin Schultz's ill-timed pinch led to the Brock Nelson goal that put the Islanders ahead to stay late in the first period.

But here's a bigger one and one that stood out even more after Sunday's loss: The Islanders have simply been more focused and more determined to win.

Prior to Game 3, there was a lot of talk about playing with urgency. Urgency at this time of year should be a given. Sullivan didn't question his team's effort after Game 3, saying that his players care and want to win.

Of course they do. Every team in the Stanley Cup playoffs wants to win. But some teams want to win more than others. In this series so far, that looks like the Islanders.

They are winning races to loose pucks, even 50-50 pucks, and seem a step quicker all over the ice. They are winning the vast majority of puck battles along the boards, where they direct the game and where they like their chances against Pittsburgh. They are supporting the puck and their defensive positioning has been solid, which is what you expect from the league's best defensive team. In short, they are outworking the Penguins and that has negated the skill advantage Pittsburgh brought to this series.

You can talk all day about line combinations, whether Dominik Simon really should be playing with Crosby (the top line had 0 points without Simon in Games 1 and 2) or about whether Jack Johnson should be in or out of the lineup. In many ways, these are minor details.

Sure, Sullivan and his staff have decisions to make (Maatta back in for Johnson?) and tactical work to do to if they want to change the ease with which the Islanders exits its zone or find a different way to help their team avoid allowing odd-man breaks. Perhaps the Crosby line needs yet another look, because the Penguins aren't going to win any series against any team when the No. 1 line isn't contributing.

But the big stuff -- the urgency, the desperation, the determination, whatever you want to call it -- has to come from the 20 players who pull on the uniform. Whoever they are. However they are put together. Whatever the circumstance.