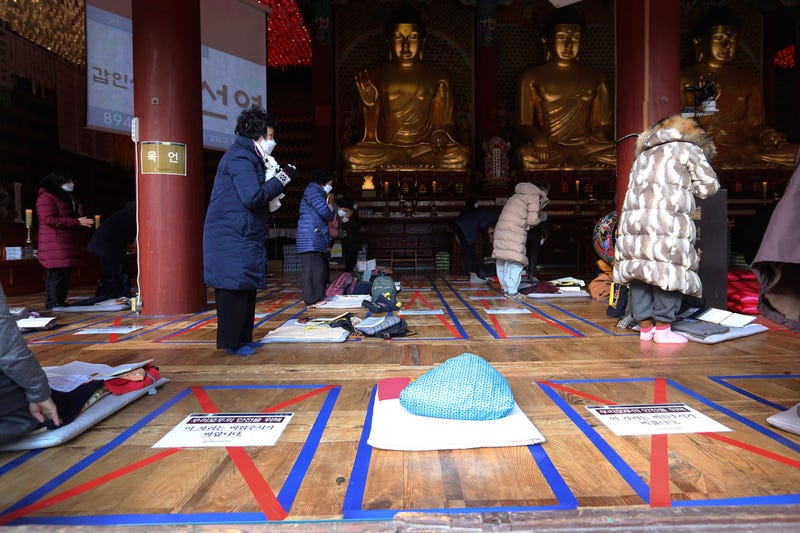 PHNOM PENH, Cambodia (AP) — Cambodian officials say a family of six and another man tested positive for the coronavirus in a rare case of local infection, and Prime Minister Hun Sen expressed concern that the woman believed to be the source had traveled extensively in the country, including the capital.

The 56-year-old woman's husband works at the Interior Ministry in charge of prisons. Hun Sen, who himself just emerged from isolation after he was exposed to the infected Hungarian foreign minister, said his three Cabinet ministers will get tested and self-quarantine.

The Health Ministry said in a statement that the woman tested positive three days after becoming feverish. She had been traveling between Siam Reap and Phnom Penh.

Hun Sen also ordered the temporary shutdown of a mall in Phnom Penh, which the woman visited last week.

Cambodia has had 315 confirmed cases of the virus since the pandemic began, most of them acquired abroad.

— Hong Kong has reported 115 new coronavirus infections, the first time it has seen cases in the triple digits since Aug. 2. The government on Sunday also announced that classes at kindergarten, primary and secondary schools will be shut for the rest of the year in light of the worsening coronavirus situation in the city. Of the 115 infections reported Sunday, 24 were untraceable. Another 62 were linked to recent outbreaks in dance studios across the city. Employees and recent guests at three restaurants in the city have also been ordered to undergo compulsory testing after multiple positive cases had been linked to the venues. Hong Kong has reported 6,239 coronavirus infections since the pandemic began, with 109 deaths.

— South Korea is shutting down indoor gyms offering intense workout classes and banning year-end parties at hotels in the greater Seoul area to fight the virus. Prime Minister Chung Sye-kyun said Sunday authorities will also ban the operation of private music institutes teaching singing and wind instruments and saunas at public bath houses in the capital area. He said fitness centers, cafes and libraries operating inside apartment complexes will also be closed. The new steps will be effective from Tuesday. The country reported 450 new cases on Sunday.

— India has reported 41,180 new coronavirus cases in the past 24 hours, with the daily toll staying below the 50,000-mark for the fourth week. New Delhi also got some respite as it added fewer than 5,000 cases for the first time in a month. The New Delhi government decided that half its employees, barring senior officials, will be allowed to work from home starting Monday. India reported another 496 deaths in the past 24 hours, raising the death toll to 136,696. India’s confirmed cases since the pandemic began are more than 9.3 million, second behind the U.S.

— A Chinese factory owned by South Korean semiconductor firm SK Hynix has halted operations after an employee was found to be infected with the coronavirus. According to state-owned Xinhua News Agency, the South Korean national worked in a plant in the southwestern city of Chongqing. He traveled to South Korea on Thursday. He displayed no symptoms, but was found to be infected with the virus when he was tested at Incheon airport in Seoul. The factory has been closed, and employees have been isolated and tested, Xinhua reported. The hotel where the employee lived in Chongqing has also been temporarily shut and hotel employees and recent guests were tracked down and tested. Chongqing has so far tested 3,283 people, and 2,674 have been found to be negative. China has so far reported a total of 86,512 confirmed coronavirus infections, with 4,634 deaths. China does not include asymptomatic cases in its tally.