With his talk of biting off kneecaps, new Detroit Lions head coach Dan Campbell certainly energized a fanbase desperate for something to cling onto after just three playoff appearances in 21 season.

"For me it wasn't a great press conference either," Schlereth said. "I just don't know how much you really listen to that. The rah rah stuff, some of that, we're simple creatures and [when you] post some bulletin-board material, it will get you upset and whatever.

"Ultimately, you look at Detroit, and I did a couple of their games - their roster is not talented enough. I don't care how many kneecaps you bite...I don't think there's anybody on their defense...at any level of their defense...defensive line, linebacking corps and secondary...that is an elite level player. So, you can talk about your toughness, and you can talk about whatever you want to talk about, you gotta have players to execute. And they just don't have enough good players right now."

Campbell, 44, is well aware of the history in Detroit, having played for the team as a tight end for three seasons, including the 2008 campaign where the Lions became the first team in NFL history to go 0-16.

Perhaps the Lions aren't in quite as bad of shape as they were then, though the franchise does appear headed for a rebuild. Campbell signed a six-year deal, and frankly, he'll need every bit of that security. The Lions went 5-11 in 2020, and that was with Matthew Stafford, who some believe the team will trade this offseason. The team's top two wide receivers - Kenny Golladay and Marvin Jones Jr. - can become free agents this offseason, and as Schlereth said, there isn't a ton to be excited about defensively. Cornerback Jeff Okudah, the No. 3 pick in the 2020 NFL Draft, was pretty underwhelming in the nine games he played during his rookie season.

To make matters worse, Over The Cap says that the Lions have just $2.5 million worth of cap space to play with this offseason.

In our latest RADIO.COM Sports 2021 NFL Mock Draft, we projected that the Lions would take former Penn State linebacker Micah Parsons with the No. 7 overall pick. Parsons might be one of the first pieces as Campbell and company rebuild their defense, but it's likely going to be a few years before opposing teams fear, well, for the safety of their kneecaps. 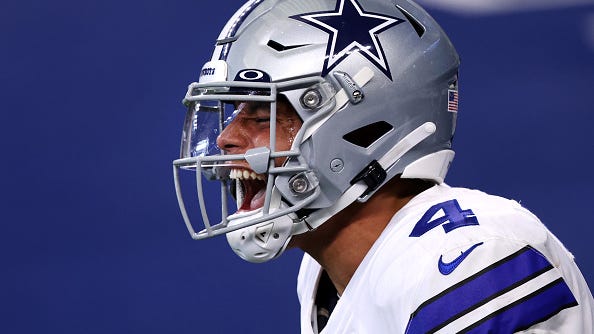 The top 5 free agent quarterbacks in 2021