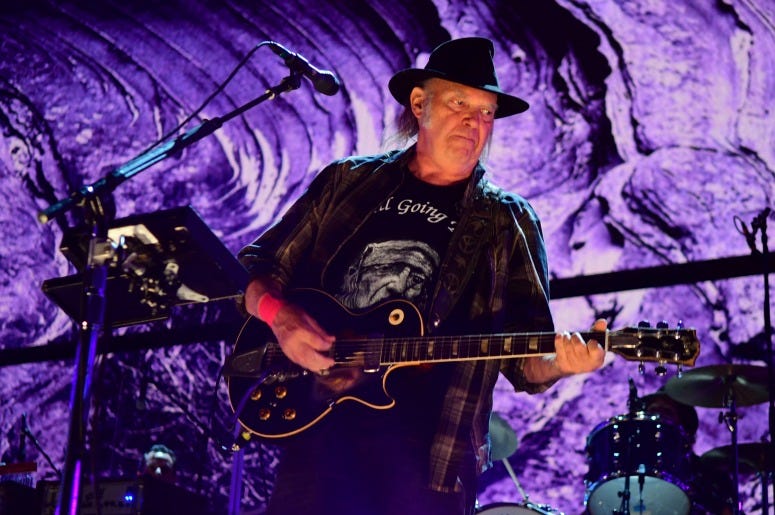 The “harvest” moon is coming. Set to appear officially at 12:33 AM ET on Saturday September 14, the sky will be lit throughout Friday night with the light of the full moon. This is the “harvest” moon, as it’s the one happening closest to the autumnal equinox or the beginning of fall.

We’re not scientists, so that’s about all we know. From what we understand it’s beautiful, and farmers use to love it. It's a moon. What we do know is Harvest Moon, Neil Young’s excellent 1992 album.

Recorded in a similar analog style to 70s classics like Harvest, Young rounded up the same personnel for a personal, swaying set of songs that showcase the icon’s songwriting skills and warm touch. Filled with touching tunes, it’s the title track that has echoed through generations with beauty and grace.

Now is a perfect time to revisit this amazing piece of 90s art, featuring several different Neil Youngs, the best broom work in music video history, and at least one lost dog.

It starts at the Mountain House Restaurant & Bar, as a man sweeps in time to the brushes of the song. Ordinary stuff, as Neil Young says hello and makes his way into the bar with his date.

As Neil takes his coat off we are introduced to the entertainment for the evening, also Neil Young. Yes, somehow Neil Young is both dancing with a lady friend and performing the song from the stage. As Young laughs and presses those impressive sideburns into his date on the dance floor, on-stage Young sings and looks slightly less enthused.

Dancing Neil has never looked happier, smiling and spinning and bursting with joy. Just watch out for the random sleeveless bongo drum player who has wandered into the crowd.

As the shot dissolves into the moon, we’re taken to another time at the same establishment. Is this a flashback? Why is the broom guy the same?

The bar this time is Alex’s, and the entertainment, well it is yet another Neil Young. This time though it’s a younger version of Young and his date that enter to dance, gliding along the floor as Young and his era-appropriate clothed band continue the same song on stage. The song is timeless, but who knew it time-traveled.

Things work out as the couple exits the bar, walking pass the broom guy, now in a different jacket because time is a flat circle. The pair retreat to a car for a make out session, which immediately disgusts a dog who hops out of a window in a nearby car.

Finally they make it to the moon for some more kissing, the broom guy sweeps his way into the bar, and nobody but us seems concerned for the dog. It was the 90s, and things were different.

Neil Young and Crazy Horse are set to release a new album on October 25. It will be his first with the band in seven years.