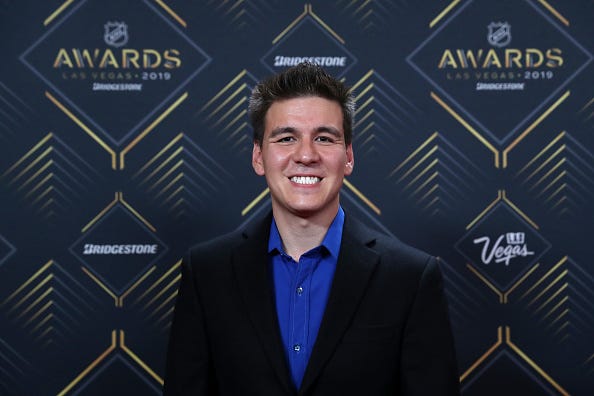 Ever since his 32-game winning streak was crushed by opponent Emma Boettcher back in June, fans have been eagerly waiting for the day when the two would face off once more in the Tournament of Champions.

Thursday night, the two whizzes did just that, Holzhauer saying, “Emma, it’s payback time,” as he took the stage for the showdown. So far, Holzhauer has made good on his payback promise as he takes the lead over both Boettcher and their other competitor Francois Barcomb.

According to the New York Post, going into Friday night’s game, Holzhauer needs just one more win to take home the Tournament of Champions crown. He goes into the game in good standing with $49,326 to Boettcher’s $26,400 and Barcomb’s $1,800.

This tournament differs from your typical, one-night-only “Jeopardy!” game. This series of games, taking place over two weeks, will crown a winner based on whoever has the highest amount of money cumulatively by the end of the games.

Trebek joked with Holzhauer a bit, asking him if his winnings on “Jeopardy!” have led him to more conservative betting habits in his everyday life. Holzhauer responded, “Oh, goodness no. I still have the app set to ‘Bet the Max’ whenever possible.”

The buzz around Holzhauer began over the summer when fans began to watch him come for all-time “Jeopardy!” champ Ken Jennings’ crown. Holzhauer lost out of the competition, coming just shy of Jennings’ $2.5 million total with a cool $2.4 million.

news
Alamo Drafthouse appears to be the latest casualty of COVID-19 pandemic
music
Flo Milli makes sure you never look at Dora The Explorer the same with new 'Back Pack’ video
news
‘Angry’ cat attacks pilot, forces plane to make emergency landing
sports
One NFL coach says next week’s roster cuts will be a ‘massacre’ around the league
i'm listening
Demi Lovato is 'full of peace,' celebrating her body and rebuking diet culture
news
59 soldiers guarding the US Capitol sickened by moldy, undercooked food