Dwayne Johnson is celebrating being a major social media influencer.

On Thursday, the 48-year-old reached the milestone of 200 million Instagram followers and became the most followed man in America on the platform.

To commemorate the occasion, The Rock turned to, where else, Instagram.

Decked out in a white shirt and bow tie, the “Jumanji” star finished by toasting with a bottle of his tequila brand, Teremana.

“Love you guys, I always got your back and let’s keep rockin’,” he told his more than 200 million followers. 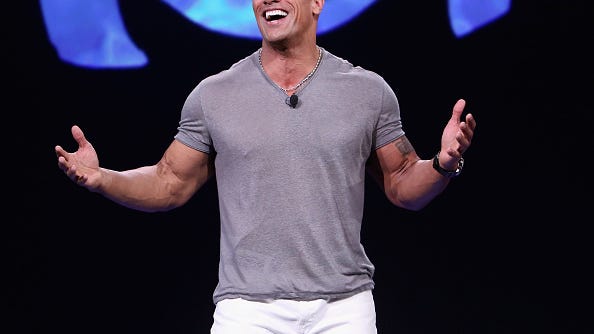 The accomplishment comes just days after Johnson made his first public endorsement of a political candidate.

In an Instagram video, the former WWE star expressed his support for Joe Biden and Kamala Harris in the upcoming 2020 election.

“Vice President Biden and Sen. Harris are the best choice to lead our country, and I am endorsing them to become president and vice president,” Johnson said.

The Rock’s 200 million followers also make him the third most followed person on Instagram worldwide.

Portuguese soccer star Cristiano Ronaldo has the largest overall Instagram following in the world with 238 million, reported BrandWatch. While Ariana Grande is next with 203 million.

sports
Ernie Johnson reveals the maddest he ever got at Charles Barkley: 'I was hot'
sports
Patriots’ Chase Winovich calls New Hampshire a ‘God-tier’ state
music
‘Rebelde’ regresará en Netflix: Conoce el nuevo elenco
news
CDC to announce guidelines for those who are fully vaccinated as early as this week
sports
Shannon Sharpe doesn't like Mike Tomlin pointing fingers at others after Eric Bieniemy gets shut out
sports
Dan Campbell predicts Duce Staley will be a head coach in future