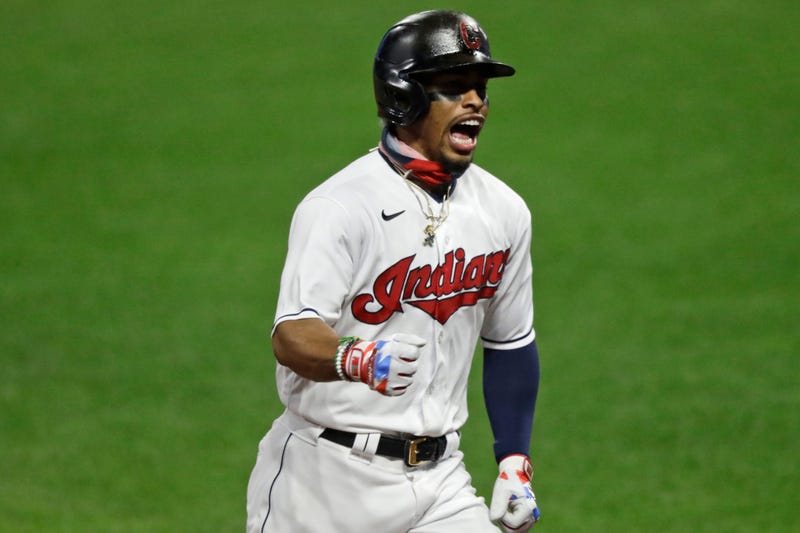 Photo credit Cleveland Indians' Francisco Lindor reacts as he runs the bases after hitting a two-run home run in the sixth inning in a baseball game against the Minnesota Twins, Tuesday, Aug. 25, 2020, in Cleveland. (AP Photo/Tony Dejak)
By The Associated Press

CLEVELAND (AP) — Shane Bieber corrected some unusual early control issues to strike out 10 and Francisco Lindor hit a two-run homer to lead the Cleveland Indians to a 4-2 win over the Minnesota Twins on Tuesday night, evening the three-game series between the AL Central rivals.

Bieber (6-0) allowed two runs and four hits in six innings as the Indians ended a four-game losing streak to the Twins and pulled within 1 1/2 games of the division leaders.

Bieber had three walks in the first three innings — he came in with just six in 40 2/3 innings all season — but regrouped. The right-hander fanned the side in the sixth to give him double-digit strikeouts for the third straight game.

Oliver Pérez and James Karnichak worked a scoreless inning each before closer Brad Hand finished for his eighth save in eight tries.

For the 15th time this season, the Indians were without manager Terry Francona, who is still recovering from surgery last week for a gastrointestinal ailment.

With the Indians down 2-1, Lindor connected in the sixth off reliever Jorge Alcala (1-1), who replaced starter Rich Hill to start the inning.

Lindor, who has yet to go on one of those streaks where he can carry the Indians, followed a leadoff walk to José Ramírez in the sixth with his fifth homer — and maybe the biggest one for Cleveland so far in this condensed season.

The All-Star shortstop fell behind 1-2 before crushing an 88 mph slider from Alcala into the right-field stands. Before the ball landed and before dropping his bat and heading toward first base, Lindor paused to scream at his teammates in the dugout.

Carlos Santana followed with a walk, and one out later, pinch-hitter Tyler Naquin delivered an RBI double to put the Indians ahead 4-2.

With Bieber on the mound, the Indians figured to have the pitching edge.

However, Hill matched Cleveland's ace pitch for pitch. And while the left-hander didn't win the velocity battle, he had the volume over Bieber as every one of his loud grunts and profane outbursts could be easily heard throughout empty Progressive Field.

Bieber's control has been impeccable this season, but he was missing his spots in the second when the Twins took a 2-0 lead on Luis Arraez's RBI double and a two-out RBI single by Max Kepler.

Ramírez's legs helped the Indians take a 1-0 lead in the first. He singled with one out and then nearly got picked off first by Hill, but beat first baseman Miguel Sanó's throw to second. Ramirez stole third on the next pitch and scored when Santana's grounder squeezed through the left side.

The 61-year-old Francona may be away longer than expected after it was revealed he's been dealing with some blood clotting issues in addition to a gastrointestinal condition.

President of baseball operations Chris Antonetti said Francona is on "the path to recovery, but it may take a little bit of time for him to get back into the dugout.”

Twins: 3B Josh Donaldson (calf) continues to rehab at the team's St. Paul training site. He took some at-bats in instrasquad games there in the past few days and executive vice president Derek Falvey said the team is taking a conservative approach because of Donaldson's history with calf issues.

Indians: Mike Clevinger returns to the roster and starts for Cleveland, which has forgiven him and Zach Plesac for breaking team rules and COVID-19 protocols. The right-hander last pitched for Cleveland on Aug. 5, three days before he and Plesac ventured out of the team's hotel in Chicago and risked exposure to the coronavirus.