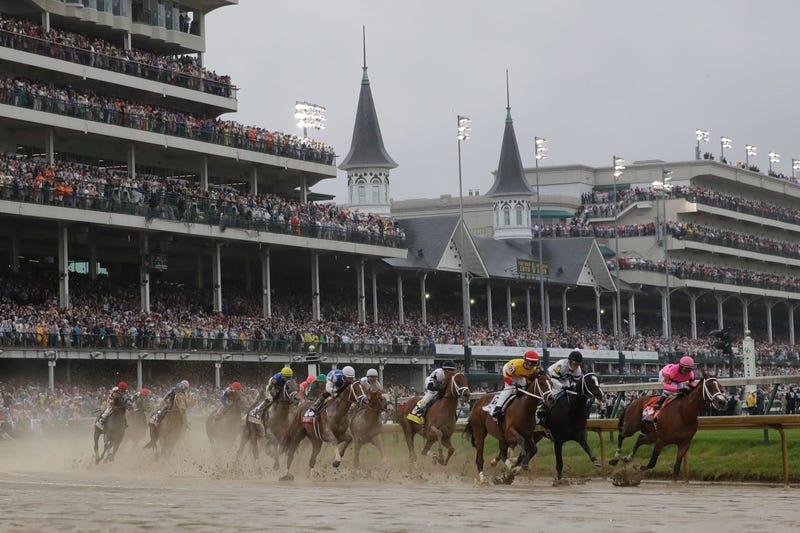 Photo credit FILE - In this Saturday, May 4, 2019 file photo, Flavien Prat on Country House, third from right, races against Luis Saez on Maximum Security, right, during the 145th running of the Kentucky Derby horse race at Churchill Downs in Louisville, Ky. Maximum Security finished first but was disqualified. The fastest two minutes in sports will also be the quietest in Kentucky Derby history. Churchill Downs scraped plans earlier this month for 23,000 physically distanced, masked fans to attend Saturday's rescheduled Tripled Crown race due to the rise in coronavirus cases. It will be the first time spectators will not be allowed to attend the race.(AP Photo/Darron Cummings, File)
By The Associated Press

LOUISVILLE, Ky. (AP) — The fastest two minutes in sports will also be the quietest in Kentucky Derby history.

Churchill Downs scraped plans earlier this month for 23,000 physically distanced, masked fans to attend Saturday's rescheduled Tripled Crown race due to the rise in coronavirus cases. It will be the first time spectators will not be allowed to attend the race.

That means no iconic scene of thoroughbreds rounding the first turn before packed grandstands beneath the Twin Spires. No sea of women in big, colorful hats or men in bright suits, many sipping mint juleps with Kentucky’s famous bourbon while cheering the Run For The Roses.

But the good news for Derby diehards is there will be a race.

The Derby has followed other sports and events in running without fans — including the Belmont Stakes in June — but the unusual scenario for the Triple Crown’s marquee event has been hard for some to grasp, including horsemen used to prepping horses for huge crowds.

“It’s definitely not going to be your normal Derby,” trainer and Louisville native Brad Cox said. “It’s always a weekend that we look forward to, actually the whole week with the lead-up.

“It’s an amazing week, kind of like a festival of racing. Obviously, with no fans it will definitely be something we’ve never experienced before.”

For a region that has dealt with social unrest and the pandemic this summer, the Derby’s absence of fans is yet another blow.

There has been more than three months of protests in Louisville calling for the arrests of police who shot and killed Breonna Taylor on March 13 in an early morning narcotics raid. No drugs were found. A demonstration last week close to the historic track resulted in 64 arrests.

And there could be more protests this week.

In announcing the decision not to allow fans, Churchill Downs president/CEO Kevin Flanery acknowledged the city “is going through a lot right now” and “a lot of people” are hurting. He said the track wants to be involved in discussions about equality and justice and that the Derby has usually been a uniting event.

“Unfortunately, just given where everything is right now, we can’t do that this year,” Flanery added. “But that dialogue will continue.”

Then there are the economic challenges.

Louisville Tourism estimated a $400 million in revenue from the two-week Derby season, which included the Kentucky Oaks for fillies run the day before. Then came postponement in March from the first Saturday in May for the first time since 1945 to Labor Day weekend, a switch that initially led to numerous events being rescheduled before being ultimately canceled by the pandemic.

Churchill Downs never considered canceling the Derby, but was insistent on having fans in the stands and infield within safety guidelines recommended by public health officials. Those plans were fluid, as the track announced a 62-page plan earlier this month that eliminated the infield and standing-room-only options and limited attendance to 14% in the grandstands and boxes.

The track eventually announced there would be no spectators at all, erasing a lucrative stream of revenue that sustained many businesses for the entire year.

“It’s really sad for the hardworking people who live in Louisville,” Hall of Fame trainer Bob Baffert said. “This is when they do well. They count on this. I feel for the people that really depend on it for their income.”

And businesses are trying to make the most of a tough situation.

Considering the stops and restarts that have occurred since March, some see opportunities with home Derby celebrations likely to be more prevalent. Labor Day weekend marks the unofficial end of summer, after all.

“The biggest thing for us has been being to serve our customers when they can’t get to a bar or restaurant,” Blue said, “especially bars, which are still very restricted around the region.

“People want to go somewhere and do something, especially in the good weather. We’re replacing that right now and meeting people’s needs.”

Meanwhile, Louisville Tourism has received numerous responses from restaurants and local attractions on Derby week plans ranging from bourbon tastings to riverboat cruises to horse farm tours. One restaurant, Proof On Main, has a Derby for Good promotion that offers take-home packages including a mint julep kit. Proceeds will go to The LEE Initiative providing relief on several fronts, including restaurant workers and Black owned restaurants in the South.

Milliner and Louisville native Kenzie Kapp expanded her colorful hat creations to include matching masks and hinted at wearing a combination even though she hadn’t planned to attend the Derby. The exclusion of fans hasn’t changed her upbeat approach, noting that the race is still an event.

Even if no one is there.

“Enjoy the moment that you’re in,” she said. “You can celebrate Derby anywhere.”