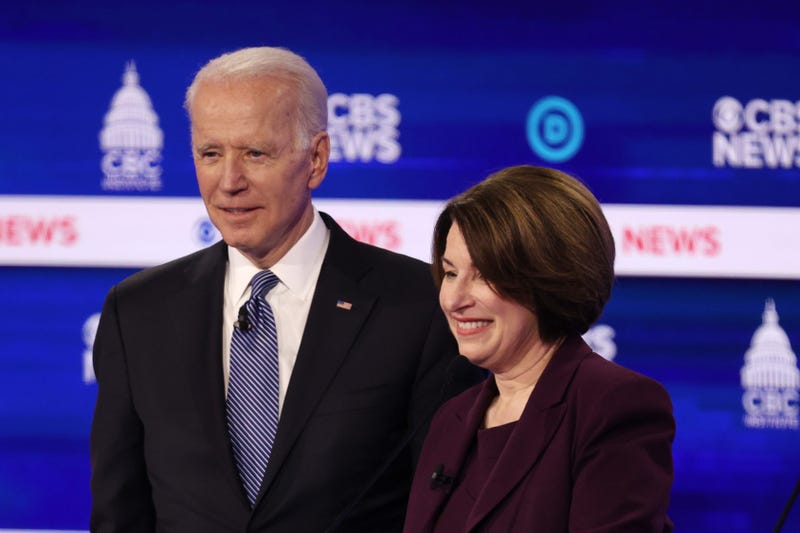 Thursday night we found out Minnesota Senator Amy Klobuchar was being vetted as a candidate for Vice President by Joe Biden.  Now, in her first interview since the announcement, Klobuchar told News Talk 830 WCCO's Dave Lee, "There have always been a lot of rumors about this.  Joe Biden is going to decide so I'm not going to go into the details of this process."

Klobuchar, when pressed by Dave Lee if she was asked by Biden about being vetted for vice president reitereated, she "would not talk about the process."

It's been speculated since Klobuchar and other Democratic female candidates dropped out of the race for the nomination that Biden would seek a female running mate.  Other names in the mix have been Michigan's Governor Gretchen Whitmer, Florida Representative Val Demings, New Hampshire Senator Maggie Hassan and California Senator Kamala Harris. Many in the Democratic party have urged him to pick an African American VP as well.

While the Biden campaign explores possible running mates, Klobuchar expressed the desire to let the process play out without much comment.

"In the end, Joe Biden is going to decide if names are put out there. He's going to decide who he wants for vice president," Klobuchar told Dave Lee. "I'm never going to go into details of this process because in the end, he makes this decision and he knows what it takes to be a good vice president. That's what I love about him.  He does his work and he does it on behalf of the American people."

"I'm just excited to support (Biden) and helping him in any way," said Klobuchar.

While never denying she was being vetted, the closest Klobuchar came to actually confirming it, was in her closing remarks. “I’ll look forward to that call from the Biden campaign,” Dave Lee quipped.  “Okay, and, when this happens, you know, just be nice there Dave,” Klobuchar said.

Notice, she said “when” it happens.

The process includes a multi-week review of her public and private life and work by a hand-picked group of Biden confidantes, who will review tax returns, public speeches, voting records, past personal relationships and potentially scandalous details from her past.

Minnesota has had two elected vice presidents of primary affiliation.  Hubert Humphrey served with Lyndon B. Johnson from 1965-1969.  Humphrey, born in South Dakota, served as a United States Senator from Minnesota prior to serving under Johnson in the White House.  Walter Mondale was born in Minnesota, and was Vice President under Jimmy Carter from 1977-1981. Amy Klobuchar was born in Plymouth, Minnesota and was the Hennepin County Attorney prior to being elected to the Senate in 2007.