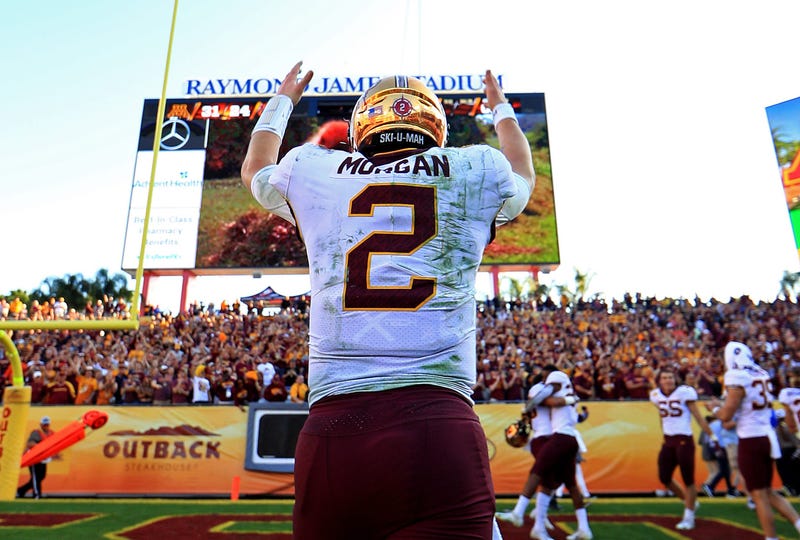 Fresh off the excitement of an 11-win season, and a thorough whooping of a bigtime SEC team in Auburn, it feels like a great time to start looking ahead at 2020 and what lies ahead for P.J. Fleck's Gopher Football team.

Let's start with a word of caution.  Nothing is guaranteed.  Just because there were 11 wins and many of the key players coming back (so far), that doesn't guarantee anything in the very competetive world of college athletics.  Especially football.

Coach P.J. Fleck knows this of course.  One of the most important things college coaches do is recruit.  And recruit.  And when that's done, you recruit again.  You never have enough players.  At any down point during the season (bye weeks, the month between the season and bowl games) coaches are on the road.  It's an endless cycle and crucial to the long term health of programs.

Even teams like Alabama and Georgia struggled when trying to replace key players during the bowl season.  'Bama squeaked by an average Michigan team without their starting QB and a number of defensive players.  Georgia beat Baylor but struggled all game to move the ball without a couple of blue chip lineman who are "preparing for the NFL Draft".  In other words, even long established programs don't have much room for error.

Minnesota does not have anywhere near the depth of talent those schools do.  The margin for error is even smaller here.  Which means these four things are very important for the U:

Let's take these one at a time.

Fleck has a pretty good recruiting class lined up for 2020.  Right now, they're ranked 33rd nationally (9th in the Big Ten).  That's solid.  It's not world-changing.  Wisconsin is 26th, Iowa 31st.  That's about where the Gophers should be at this point.  The success of this season will have much more effect on the 2021 class.  The 2020 recruits have mostly been in place since summer (or before) and the staff is working now on the 2021 class.  It's all about talent and then developing that talent.

What Fleck has done well, is add significant speed and skill to the Gophers.  You saw it on the field against Auburn.  The Gophers were not pushed around.  The game was not too fast for them.  The talent was at least enough to stay with Auburn.  The Tigers, by the way, have the 7th ranked class in 2020.  This tweet from GopherHole.com illustrates what Minnesota is up against in recruiting against programs like Auburn.

When you look at the recruiting rankings of Auburn and Minnesota's rosters (via 24/7), you realize stars don't always matter!!!Auburn:5-stars: 34-stars: 40#Gophers:5-stars: 04-stars: 5

Does that mean Minnesota can't compete with Auburn?  Of course not.  We just saw that they can.  It does mean that Fleck and company have to make sure they hit the right recruits, and develop them.  And keep them healthy.  Players like Antoine Winfield Jr., Tyler Johnson, Rashod Bateman, would absolutely play for Auburn.  Fleck's staff did an outstanding job getting players like that, and coaching them up.

(Note: Winfield and Johnson were recruited by Kill/Claeys but Fleck deserves credit for keeping and coaching them) So far, so good.

Players coming back is a big one in 2020 because of one major question mark.

First though, there are a few seniors this team loses that will be missed.  Tyler Johnson, the best receiver in school history is off to play on Sundays.  Also leaving are running backs Rodney Smith and Shannon Brooks.  Smith, who ended up staying for 6 years after medical redshirts, is one of the most productive offensive players in school history.  Brooks had some big moments in what ended as an injury-ravaged career (two ACL tears).

Now the biggest question.  Sophomore safety Antoine Winfield Jr. will certainly explore the NFL Draft, and could definitely decide to turn pro.  He was a first-team All American selection who lead the team in tackles and interceptions.  Winfield is one of the best defenders in school history, without question.

Without Winfield the Gophers lose seven of their top 11 players on defense.  The offense only loses three, but all three had a big impact.

But the well is not dry.  The entire offensive line is back, as are most of the key pieces.  That sets a great foundation for the Gopher's record-setting offense.  As does quarterback Tanner Morgan.  The sophomore took over in camp after Zack Annexstad was ruled out for the year with a foot injury.

All Morgan did was become one of the most efficient passers in the country and set team records for yards and touchdowns.  He will again have some competition from Annexstad, who accoring to spring camp reports was on track to be the starter.  Good problem to have.

The Gopher's receivers, among the best in the country, get back all but Johnson.  Rashod Bateman has at least one more year before he heads to the NFL (and he could be more talented than Johnson).  Chris Autman-Bell had some great moments in 2019 and should develop further.  Demetrius Douglas should have a bigger role in 2020 too.

While losing Smith and Brooks hurts, the Gophers are loaded with running back talent.  Mohamed Ibrahim, who was the team's leading rusher in 2018 while those two battled injuries, was fantastic in the Outback Bowl running for 140 yards and a TD.  He's back for his junior year, and there is young talent ready for a shot in the backfield too.  Bryce Williams has seen a little action and the coaches think he is ready to break out.

Reloading on defense is a bit more unknown.  There will be many new starters along the defensive line and at linebacker.  There's a solid rotation of cornerbacks however, and again, the coaching staff says there is a ton of talent waiting get on the field.  How that comes together in 2020 will be the team's biggest question mark.

There are a ton of players "in the pipeline who are going to be very special and impactful", according to Fleck when he talked to the Sports Huddle back in early December.

As for #3, a key to this 2019 team's success was it's relative health.  Senior linebacker Kamal Martin and running back Shannon Brooks were dinged a large portion of the year and neither played in the Wisconsin game, or the Outback Bowl.  Otherwise, the key players stayed mostly healthy.

In the Iowa game, Morgan went out with concussion symptons on the last drive which brought in unproven freshman Jacob Clark for two ugly snaps.  Otherwise Morgan played all year which was key to the their offensive success.  Having Annexstad back gives the team depth there but continuity is so important at the QB position.

Emerging offensive tackle Daniel Faalele missed the last couple of games including the Outback Bowl.  The 6 foot 9 inch, 400 pounder will be back and healthy in 2020 with the rest of the offensive line.

Fleck was able to redshirt a ton of players, and get many other young players limited experience.  Without having to rely on them to play key minutes like happened in 2018.  There's depth, we just don't know who will emerge as the key contributors yet.

Then there is #4, which I only bring up because of the circumstances surrounding the team when Fleck showed up.  Nothing can derail a program like controversy and the Gophers are no strangers to that.

Head Coach Tracy Claeys ended up in a no-win situation as players threated to boycott the Holiday Bowl following the suspension of 10 players in connection with allegations over sexual assault.  The Gophers ended up playing, and beating, Washington State.  Only to see Claeys fired by Athletic Director Mark Coyle the following week.  Claeys had voiced support for the boycotting players on Twitter and it ended up being the final straw for the University.

And that's where Fleck came in.  He came to Minnesota intent on installing his culture, and his "Row the Boat" mantra.  He's done it beautifully so far.  The foundation that was laid by Jerry Kill (and Claeys) was a massive improvement from the Tim Brewster-era.  Fleck has now improved upon that.  This feels like a program doing things the right way, and Fleck appears to be the person to lead the plaeyers to do the right things.  He has a fresh contract extension and the future looks very bright.

One final thing for 2020.  The schedule.  It's a little bit different than what we've seen the last few years.

Non-conference, the Gophes start with two at home.  Florida Atlantic opens the season on Thursday, September 3rd.  Then Tennessee Tech comes to Minneapolis.  The Gophers open the Big Ten very early and with a rival.  Iowa is here on September 18th as the Gophers look for a little revenge (and bring home the pig).  Then it's BYU and another home game.

The Big Ten really kicks in with road games at Maryland, and at Wisconsin (normally the end of the year game).  Michigan plays here next, and there hasn't been a Little Brown Jug game since a 33-10 Wolverine win in 2017.  That will be a huge game for the Gophers.

At Illinois, at Michigan State, home for Purdue before the bye week on November 14th.  The Gophers finish with Northwestern and home and Nebraska on the road.

It's way too early to start predicting what will happen, but with the Gophers on the upswing, there's no question they'll be in the Big Ten West hunt heading into the season.  The schedule isn't easy, but there's space for this team to take the next step and get to the Big Ten Championship game for the first time ever.