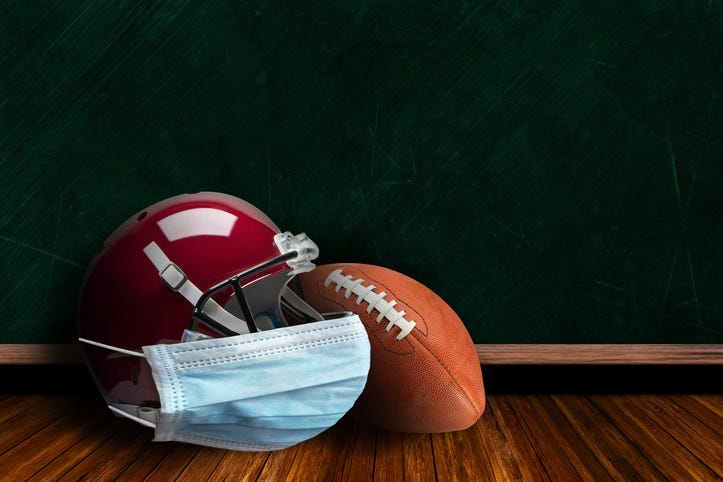 I’m an optimist by nature. When I saw the extremes that NFL teams—including the Vikings—are going to in terms of extensive testing and protocols to strongly encourage safety and social distancing in team facilities and on road trips, I thought—yes, this could work and it’s plausible we can have a full 2020 regular season plus playoffs.

Sure, the bubbles in place for the NBA, WNBA and MLS that are working well so far seem to be the surest path to completing a season with minimal interruption. The NHL will soon commence their playoffs in the Edmonton and Toronto bubbles. But MLB teams such as the Twins have started their abbreviated season with teams traveling and despite the COVID flare-up in Miami that shut down the Marlins for at least a week, other teams are playing on with no players testing positive.

Players on this list either tested positive for the virus or are in quarantine after being in close proximity to an infected person. Hopefully these players will soon pass the multiple tests needed to report to Vikings camp and begin strength/conditioning work before on-field practices begin in mid-August.

News also broke of the decision by the Vikings’ top free agent signee this year—defensive tackle Michael Pierce—to opt out of the 2020 season due to his history of asthma which makes him a high-risk case. Pierce was expected to replace Linval Joseph as a run-stopper and now vets Jaleel Johnson and Armon Watts will likely see more play time at defensive tackle.

The other surprising news out of Vikings camp involved head trainer and the team’s Infection Control Officer—Eric Sugarman—testing positive for COVID-19. Sugarman said his symptoms were mild so he hoped to return to the team’s Eagan facility soon.

That eight players (9% of the current roster) and the head athletic trainer are in COVID quarantine as camp opens is somewhat concerning but certainly not a doomsday scenario at this early stage of players ramping up via strength and conditioning work before they hit the practice field. If they are asymptomatic or experiencing mild symptoms, these quarantined players can still do strength and conditioning work at home until they are allowed at Vikings camp.

As a former team exec, I can empathize with the anxiety this COVID-ridden season is creating in NFL front offices. It likely will be a constant factor to be dealt with this season, similar to injury concerns over the course of a season, yet different in the worry about a massive team outbreak.

The realistic view is it’s going to be this type of roller coaster season around the NFL and in Vikingland with COVID creating challenges for teams. Backup players will be more important than ever as beyond being injury replacements, they will have to be ready to step into the lineup if a starter tests positive for COVID late in the week and is forced to miss a game. There also will be more movement of players from the increased practice squad (raised from 10 to 16 members) to the active roster to provide depth if and when they are needed.

The hope for all teams is their starting quarterback, other top players, an entire position group or several members of the coaching staff don’t test positive or come down with COVID symptoms during a game week, forcing them to sit out which would create a big competitive disadvantage if the game is not postponed until later in the season.

1. NFL Commissioner Roger Goodell addressed fans in a letter this week and said the plan is for training camps to open and games to be played beginning September 10 but adjustments might be necessary. He said, ““This process has not been easy. COVID-19 will continue to present a major challenge to nearly every area of American life. Football is no exception. Every step of the way, our focus has been on the safety of players, coaches, personnel, fans and our communities.

“Adaptability and flexibility will be needed for the foreseeable future. After all, even the best game plan changes as new challenges arise. While this year will be forever defined by a heartbreaking global pandemic and a transformative social justice movement, I am reminded of the tenacious, resilient spirit of our country, the NFL community, and you, the greatest fans in the world. Thank you for your continued support. Now let’s play football.”

2. Pierce was one of 31 players league-wide thus far to opt out this season due to coronavirus concerns. More may choose that route before the August 4 deadline. The Bears will be without their excellent defensive tackle Eddie Goldman, the Packers will be missing free agent signee at wide receiver Devin Funchess and the Patriots have been hit hard with six players opting out including their Pro Bowl linebacker and defensive captain Dont’a Hightower.

3. According to media reports, the good news for the Vikings on the contract front is that after a threatened holdout, Dalvin Cook did report to Vikings camp on Tuesday as required in order to avoid losing an accrued season towards becoming an unrestricted free agent next March. Cook and his agent are still seeking an extension that would make the Pro Bowler one of the top paid running backs in the league. He is currently under contract in 2020 for $1.33 million on the final year of his rookie contract and the NFL’s highest paid backs are in the $12.5-$15 million per year range.

4. Other league contract news featured Chargers defensive end Joey Bosa signing a five year, $135 million extension to make him the NFL’s highest paid defensive player in terms of new money. Bosa has one year left (for $14.4 million) on his rookie deal so he’ll be under contract for $24.9 million per year over the next six seasons. It further proves the Vikings were smart to sign their two-time Pro Bowl defensive end Danielle Hunter to a $14.4 million per year deal two years ago (after his third season) that carries through the 2023 season but he’ll likely be extended long before then if he continues his outstanding play.

Jeff Diamond was the NFL Executive of the Year in 1998 after the Vikings' 15-1 season. He also is former president of the Tennessee Titans. He does sports/business consulting, media and speaking work including corporate and college speaking on Negotiation, Management, Leadership and Sports Business--contact him at diamondj4@comcast receiver off