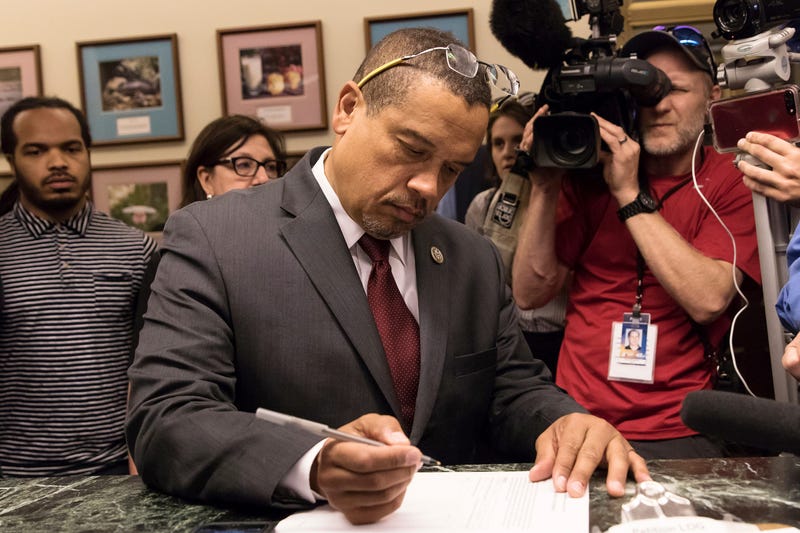 Photo credit FILE - In this June 5, 2018, file photo, Rep. Keith Ellison, the first Muslim elected to Congress and a top official with the Democratic National Committee, files to run for Minnesota attorney general at the Secretary of State's office in St. Paul, Minn. Ellison is now the Minnesota attorney general who is taking over as lead prosecutor in George Floyd's death. Doing so is giving Ellison a national platform to talk about race in America. And while Ellison is careful not to talk about details of the criminal cases against four Minneapolis police officers, he's grabbing the opportunity to raise issues about police reform that he's worked on in the past. (Lacy Young//Minnesota Public Radio via AP, File)
By The Associated Press

MINNEAPOLIS (AP) — Keith Ellison has been a civil rights activist, a defense attorney, a cable-TV favorite, a rabble-rouser in Congress, a party operator and an occasional provocateur on Twitter.

But he’s only rarely been a prosecutor — until now.

The Minnesota attorney general is at the helm of the George Floyd murder case, certain to be among the most scrutinized in the country and already the flashpoint behind an emerging national movement to root out racism in the criminal justice system.

Ellison, the first African American elected to his job, is now tasked with nothing less than making that system work.

Expectations are high, with many people finding it hard to imagine a failure to convict the four officers charged in Floyd's death.

“What we need is accountability from a top lawyer like Keith Ellison to put these cops in jail. Keith can get the job done,” said Clarence Castile, a Minnesota advocate for police reform whose nephew, Philando Castile, was killed by an officer in 2016. “Goddamn it, he better get the job done.”

Ellison has made clear he feels the pressure. He repeatedly warns that “winning a conviction will be hard" and notes he'll leave the prosecuting to lawyers experienced in securing convictions. Still, he's seized on his role overseeing the prosecution to make himself the public face of the case and a central voice in a national conversation.

“This is a soul search for the whole nation,” Ellison said in a recent Associated Press interview.

Police-involved deaths are typically handled by county prosecutors. But Hennepin County Attorney Mike Freeman, who is white and has little track record of prosecuting police, was viewed skeptically by many in the black community.

When Freeman didn't immediately charge the four officers involved in Floyd's death, Floyd's family and others lobbied Gov. Tim Walz to give the case to another prosecutor. Freeman agreed to a joint investigation — with Ellison in the lead.

Critics immediately raised concerns. Some pointed to a 2018 tweet in which Ellison held a copy of “The Antifa Handbook” — a guide to radical protest — and taunted President Donald Trump.

Ellison is “well known for politicizing issues but will need to rein in his past inclinations to conduct his job fairly on behalf of the public," state Senate Majority Leader Paul Gazelka said.

Ellison, 56, has been brushing off such criticism since he won the state office in 2018, after a 12-year stint in Washington where he was the first Muslim elected to Congress and was sworn in using Thomas Jefferson's Quran.

Ellison spent much of his time in the Democratic minority, with a platform to try to pull his party to the left. He was a regular guest on cable TV and a prominent booster for Vermont Sen. Bernie Sanders' presidential bid.

He jumped into the party's ideological fight in 2016, mounting a losing bid for the chairmanship of the Democratic National Committee. The bitter fight with centrists resurfaced Ellison's decades-old comments supporting Louis Farrakhan, leader of the Nation of Islam. Ellison has since disavowed the group.

If Ellison’s national reputation was as a progressive purist, his work as attorney general has been more tempered. While pursuing a liberal policy agenda — calling himself “the people’s lawyer” — he’s also sought some consensus on police reforms in a state that has been riven by a string of police shootings.

Last year, he organized a group of activists, law enforcement groups, a prosecutor and judge to tour the state to listen to communities about policing and devise some proposals.

The effort was a notable outreach to police, said Matt Gottschalk, director of public safety in Corcoran, a Minneapolis suburb, who represented the board of directors for the Minnesota Chiefs of Police Association in the group.

“There hasn’t been a recent attorney general that has politicized police officers’ actions as much as he has in campaigning,” Gottschalk said, “But he’s had the right conversations with law enforcement since.”

Ellison's ties to Minneapolis' African American community run deep. He moved from Detroit to Minnesota for law school and stayed, working as an organizer, activist and defense attorney. Always a good talker, he hosted a talk show on a black radio station — adding debates about welfare reform and police brutality, he has said, to the jazz and gospel programming. He won a seat in the state House before going to Congress.

The Floyd case could bring some tensions with progressives who have long viewed Ellison as an uncompromising ally. Ellison is among Democratic politicians who have distanced themselves from calls to defund the police, though has has expressed some sympathy with supporters of that idea — including his son, Jeremiah Ellison, a member of the Minneapolis City Council.

“What I will say is that the people who called for it are are making a valid case for serious transformation," Ellison told the AP. “And they should be listened to rather than dismissed, right? You know, they’re not talking about leaving people on their own. They’re talking about a greater level of safety and security and human rights.”

One of the most important things Ellison can do now is use his credibility to manage expectations, said Susan Gaertner, a former prosecutor for St. Paul's Ramsey County.

"There’s an expectation that this case, this prosecution, can amend for 400 years of racial injustice and that is simply too much to expect from a single criminal case,” she said.

Ellison has pleaded for patience. But he's not downplayed the weight of this moment, as Americans reckon with racism in policing, health care and other institutions.

Clida Martinez Ellison, the daughter of a voting rights activist, taught her children to “stand for justice,” he said.