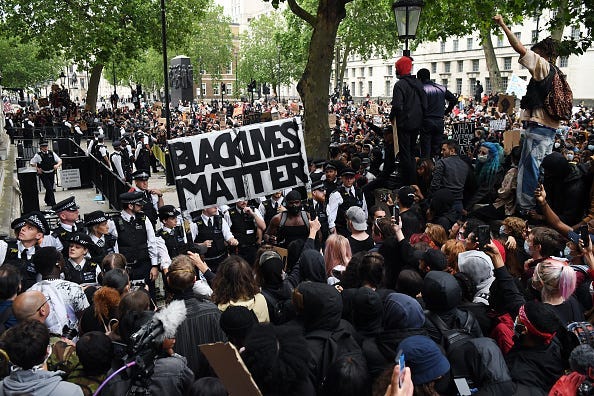 "I believe the evidence available to us now supports the stronger charge of second degree murder," Ellison said, detailing the charges against the other three officers and adding, "I strongly believe these developments are in the interest of justice for Mr. Floyd."

He added, though, that winning a conviction against a police officer for murder will be hard. "I say this not because we doubt our resources or our ability ... but history does show there are clear challenges here."

The charges came against the backdrop of a country in chaos following Floyd's death, which set off a string of sometimes-violent protests in Minneapolis that spread from coast to coast.

All officers who were at the scene when Floyd died while Officer Derek Chauvin knelt on his neck for more than eight minutes -- in broad daylight on a city street while the victim said he couldn't breathe -- have now been charged. Chauvin was charged last Friday with third-degree murder and manslaughter, and voices have been raised since then with calls for the rest of the officers involved to face charges just as serious.

An independent autopsy at the request of family attorneys Benjamin Crump and Antonio Romanucci found Floyd died of asphyxiation, not only from pressure applied to his neck in the video, but also from officers on his back. Knees on his back compressed his chest, forcing him to be unable to draw breath as another officer knelt on his neck, according to autopsy results released by the attorneys.

A forensic pathologist from the University of Michigan said the manner of death was homicide.

With that information, the family wanted first-degree murder charges against Chauvin, and charges to the fullest possible extent against every other officer on the scene. "They want equal justice for African Americans because black lives matter and George Floyd's life matters," Crump said when the autopsy was released.

He Tweeted about the family's reaction to news of charges against all four officers.

FAMILY’S REACTION: This is a bittersweet moment. We are deeply gratified that @AGEllison took decisive action, arresting & charging ALL the officers involved in #GeorgeFloyd's death & upgrading the charge against Derek Chauvin to felony second-degree murder. #JusticeForGeorge pic.twitter.com/jTfXFHpsYl

The first autopsy released by officials, meanwhile, found that Floyd's overall health contributed to his death. "No physical findings that support a diagnosis of traumatic asphyxia or strangulation," noting that "Mr. Floyd had underlying health conditions including coronary heart disease ... The combined effects of Mr. Floyd being restrained by police, his underlying health conditions and any potential intoxicants in his system likely contributed to his death."

On Monday, after taking over the case, Ellison promised prosecutors would be careful and methodical. He asked the public on Wednesday for continued patience, saying the case continues to be under investigation. "I also ask for your trust, that we are pursuing justice," Ellison said, adding his team is following the path of justice wherever it leads.

Meanwhile, the Minnesota Department of Human Rights announced Tuesday it will begin an investigation into the Minneapolis Police Department after filing a civil rights charge related to Floyd's death.

They're also investigating "policies, procedures, and practices over the past 10 years" that will determine if the MPD has engaged in systemic discriminatory practices towards people of color and ensure any such practices are stopped.

Minnesota has one of the strongest civil rights laws in the country, which make it illegal for a police department to discriminate against someone because of their race. This investigation of the entire police department is meant to allow the Department of Human Rights "to take swift action in response to any determination of civil rights violations."

“The charges announced by Attorney General Keith Ellison today are a meaningful step toward justice for George Floyd. But we must also recognize that the anguish driving protests around the world is about more than one tragic incident," Gov Tim Walz said in a statement.  “George Floyd’s death is the symptom of a disease. We will not wake up one day and have the disease of systemic racism cured for us. This is on each of us to solve together, and we have hard work ahead. “We owe that much to George Floyd, and we owe that much to each other.”

The Department of Human Rights will seek agreement from city leadership and the MPD to immediately implement interim measures in advance of long-term measures to address systemic discriminatory practices.

They're also asking for public input. Minnesotans with information that can further the investigation into the MPD should contact the Department of Human Rights atmn.gov/mdhr or 651-539-1100.