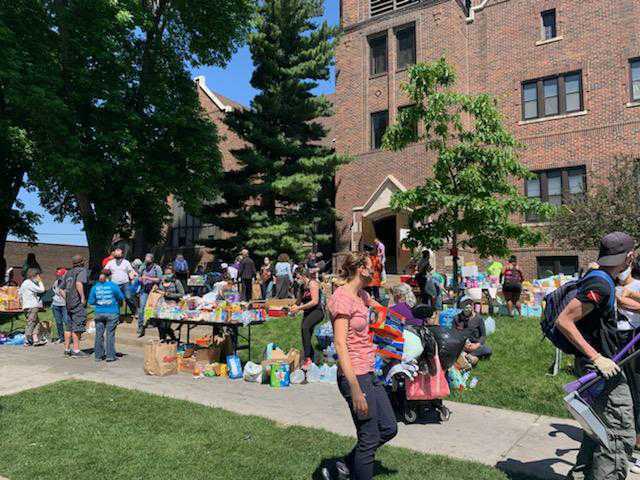 Pastor Ingrid Rasmussen from Holy Trinity Lutheran Church in South Minneapolis shared what has been happening in her community via Facebook live this morning.

At the start of her Facebook live she said his name. George Floyd. “Its the violence and brutal murder of him that has lead to what we are going to see here,” Rassmussen said.

As the eight months pregnant pastor walked around her community she showed the standings of different buildings. A local brewery, an independent bookstore and the post office.

She also brought attention to the state patrol and the National Guard that lined the street protecting where the third precinct used to stand.

“As I said to the congregation yesterday or the day before,” Rasmussen said, “the violence and destruction that we’ve experienced the last two nights are but symptoms of generations of inequality”

Rasmussen continued to walk through the neighborhood showing that state buildings boarded up and tagged with spray paint. She even apologized for some of the tags that read “F--- 12.”

“We got tagged a couple of times,” Rasmussen said walking by her church. She showed the live stream one tag that read ‘#BLM’ saying, “That's maybe a tag we’ll keep, BLM.”

Walking through the neighborhood, by two affordable housing buildings that the church built and still care for, she recalled the different smells of a Metro PCS store where they would get phones from for those coming out of ICE detention. But now, the building sat empty, burnt to a crisp.

Even with tears in her eyes Rasmussen continued to say hello and greet almost every person that walked by her.

“The minute I stepped out of the car this morning people were here to help,” Rasmussen said, “strangers who asked what they could do to assist the church.”

The eight-month pregnant Rasmussen ended her live stream by recalling a poem by Langston Hughes. “What happens to deferred dreams? They explode,” Rasmussen said, “ and we certainly have experienced that.”