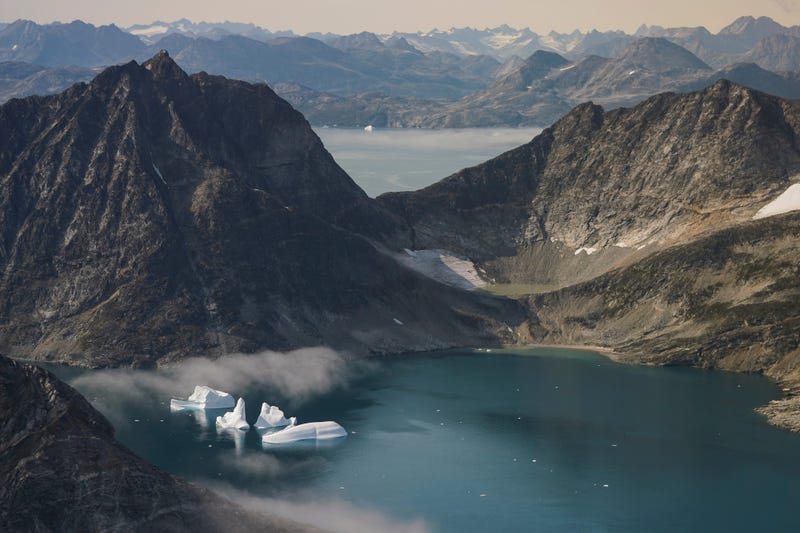 NASA scientists are crisscrossing Greenland on a mission to track melting ice.

RELATED: Editorial- UN Climate report is another reason we must change.

A team of scientists and engineers aboard a research plane this week are dropping probes into the ice to help figure out which is the bigger cause.

If water is playing a bigger role than scientists had thought, that could mean seas will be rising faster than expected.

While Greenland does see ice melt every summer, this year the loss has been dramatic, and scientists are warning that the melting will only compound due to something called "positive feedback", a climate change amplifier. Between 2011 and 2014, satellite and modeling data found that the Greenland ice sheet lost an approximated 269 billion tons of snow and ice annually, raising sea levels about 0.74 millimeters (mm) each year.

Positive feedbacks, or amplifiers are common now in the Arctic and worsen the effects of climate change in those areas.  As snow and ice begin to rapidly melt, the surface darkens, allowing it to absorb even more heat, and melt even more.  The normal snow and ice pack reflects much of the sun's heat.

The summer melting of ice in Greenland is very irregular each year, spiking when weather systems bring warm air masses north over the sheet of ice.  The worst year on record for melting is 2012 and it's not clear yet if 2019 will be an unusually bad year for melting.

But, what is very clear to scientists, is the trend since the 1970's of Arctic warming.  The summer melt season is starting earlier, lasting longer, and becoming more intense.

Samples of ice cores on Greenland paint an even worse picture.  The melting is likely the worst it's been in seven or eight thousand years.  Ice core samples record an annual record of melting and refreezing.  Those core samples say Greenland is losing ice far too quickly, and climate change is impacting the Arctic sooner, and the impact larger, than previously thought.

The melting itself is also eroding the ice.  Rivers of water have formed both on top of, and underneat the ice.  Those rivers are carrying more ice with it into the ocean.

The compounding of the meltwater is now having an effect on ocean levels.  The ice in Greenland's sheet (over 3km thick in some places) carries enough water to severely impact rising seas.  Globally, average sea levels have increased by around 3.5 millimetres per year since 2005.  Projections show global sea level rise could range from 0.2 - 2.0 meters by 2100.

Researchers have concluded that, even if the strictest global emission standards were met, sea levels would still rise from 0.7 to 1.2 meters within the next two centuries which would change the face of the planet's coastlines significantly.

According to NASA, "Ice loss near the poles from glaciers and ice sheets is one of the most significant contributions to global sea level rise; the largest single source is Greenland, with the island’s losses increasing by the decade."