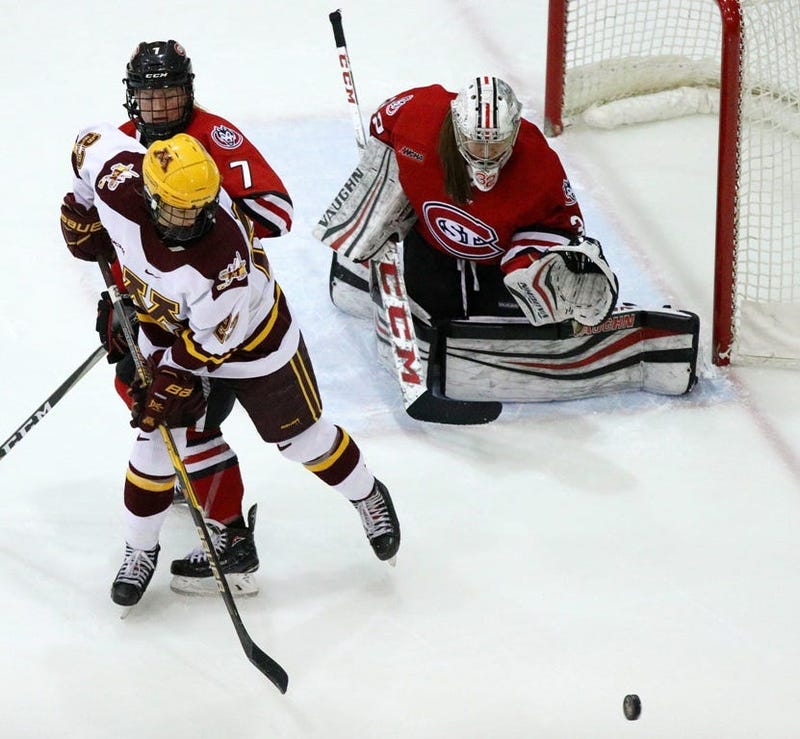 It was a hat trick for the Gophers on Saturday, and additional victory on Sunday, with wins in men's and women's basketball, as well as men's hockey.

At Mariucci Arena, the Gophers scored three goals in a two-minute span of the second period to beat St. Cloud State 4-1 on Sunday to win the Mariucci Classic tournament.

Tyler Nanne had a goal and an assist for the Gophers, with Jack LaFontaine making 24 saves for his second win in goal over the weekend.

The Gophers got to the final by beatint Bemidji State 5-2 in Saturday's opening round, while St. Cloud State drilled second-ranked Minnesota State Mankato 7-2.

Saturday's win by the Gophers was the 300th victory for head coach Bob Motzko on a night when the Gopher players all wore gold jerseys with the nickname "Wooger" on their backs in honor of former coach Doug Woog, who died earlier this month.

At Williams Arena, Gabe Kalscheur scored 23 points, and Daniel Oturu added 21 points and a career-high 20 rebounds for Minnesota's men's basketball team in a 89-62 win against Florida International on Saturday

Marcus Carr, who had 35 points two games prior in a win against then No. 3-ranked Ohio State, chipped in with 17 points for Minnesota.

Devon Andrews had 14 points to lead FIU after scoring just three in the first half due to foul trouble.

Osasumwen Osaghae, who started the game leading the nation in blocks, had 12 points, 10 rebounds and five blocks for the Panthers, who had their six-game winning streak snapped.

The Gophers finished their non-conference schedule at 7-5 and open Big Ten play Thursday at Purdue.

At State College, Pa., the Gopher women sprinted to a 33-point lead and held off Penn State for a 81-74 win in the Big Ten opener for both teams on Saturday.

Minnesota took a 54-21 halftime lead at the Bryce Jordan Center before the Nittany Lions began chipping away.

Kamaria McDaniel scored 25 of her game-high 31 points in the second half for Penn State, while the Gophers struggled with 33 percent shooting in the final two quarters.