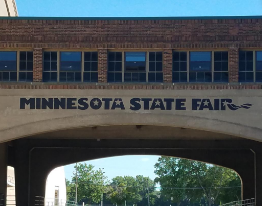 Metal detectors for the Minnesota State Fair are coming for 2020.

The state fair board approved installation of the security devices during the weekend's Minnesota State Agricultural Society convention in Bloomington.

It's part of nearly $10 million in improvements that were finalized by the fair board.

State Fair general manager Jerry Hammer said in a statement that the metal detectors would only be installed during fair time at the historic fairgounds in Falcon Heights.

“We have looked at adding metal detectors as part of our safety program for a while now, as we believe this is the next step in maintaining a safe and secure environment.”

Other improvements are coming to all buildings in the livestock complex.

Renovations to the building at 1640 Como Ave., across the street from Gate 7, including creating a new year-round ticket office.

Funds for all state fairground upgrades come from operating revenue and grants from the Minnesota State Fair Foundation.

The $10 million includes $5.1 million in maintenance projects and another $4.5 million building improvements.

The fair board of managers also approved admission prices for the 2020 fair, which will remain unchanged from 2019.

The weekend convention included meetings with the Minnesota County Fair Federation and the Midwest Showman's Association.

The 2020 Minnesota State Fair runs from Aug. 27 through Labor Day, which comes on Sept. 7.