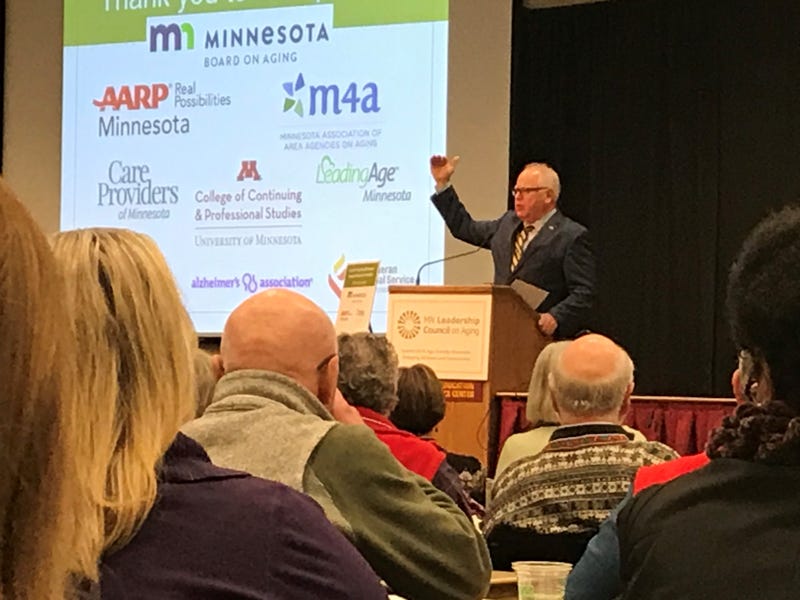 Minnesota Governor Tim Walz on Wednesday stood in front of a crowd at the Minnesota Leadership Council on Aging's 2019 Summit to discuss what the state can do to assist its aging population.

The governor then took another step by signging an Executive Order declasing Minnesota an Age-Friendly State as the state looks to improve the lives of those who are getting older statewide.

According to data collected by the Minnesota State Demographic Center, in 2020, the state will have more people over the age of 65 than under the age of 18 for the first time ever.

"The Baby boomers are aging," Walz said. "It's somethinig I saw working with Veterans Affairs. Most people think of the VA as World War II and Korean War veterans, but it's now Vietnam and Gulf War veterans who are now approaching 65 of 75 years old."

"Healthy and purposeful aging is about much more than doctor appointments and long term care," Harpstead said. "I took this job because as I become an elder, I thought I could bring my 40 years of management experience to the Department of Human Services."

Walz pointed to the City of Rochester as an example of a community becoming age-friendly through transportation and housing initiatives.

"Things like color-coding where the lights change on the sidewalks leading people back to where we have care facilites for people to stay as independent as possible," he said.

Harpstead and Gov. Walz discussed how transit can play a vital role into Minnesota's progress in becoming an Age-Friendly State.

Walz said more can be done to move people around in rural areas such as St. James and Medalia. Meanwhile, Harpstead called on ride-share programs such as Uber and Lyft, or grocery delivery companies, to contribute and allow people to live their lives in the the places they want to live.