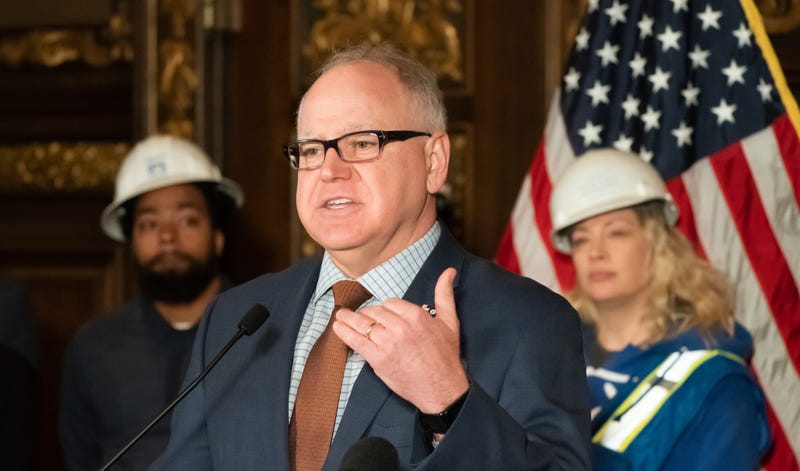 Gov. Tim Walz Thursday submitted a plan to use $853 million from the federal CARES Act for COVID-19 relief in Minnesota.

Lawmakers, the Coalition of Greater Minnesota Cities and a letter from Duluth Mayor Emily Larson were among the cries for allocating the funding. Larson said CARES Act funding was needed “immediately” with the city facing a budget shortfall up to $38 million.

$841 million will go to local governments to provide grants to hospitals, individuals or businesses affected by the pandemic, calculated by the Department of Revenue with a per capita formula; $12 million will go to food shelves. The state legislature did not agree on a deal to distribute funds during the recent special session.

This afternoon, Governor Walz announced that he is finally distributing CARES Act funding to communities across Greater Minnesota.While I am pleased by this announcement, it is LONG OVERDUE.Read my full statement here: https://t.co/NRtLYw7YzX

Walz’s office reports 300,000 Minnesotans have visited food shelves since the pandemic began, a 30 percent increase. Second Harvest Heartland CEO Allison O’Toole on with Paul and Jordana on NewsTalk 830 WCCO Thursday said the entire hunger relief network is “thrilled,” but it is a “fraction” of what is needed. They’re planning for an 18-month recovery and a prolonged food insecurity crisis.

“The reason that the surge of hunger is coming a little bit later when you think about the virus, there is a lot of stimulus money out in the community right now in terms of extra unemployment benefits, there’s some extra SNAP money, that’s food stamp money, but some of that ends the end of July, some a little later in the summer, but that is when that spike in hunger goes way up,” O’Toole said.

O’Toole said from what she knows, half will go to food shelves to support front line work addressing hunger and half to food banks to help source, store and distribute food.

Once it’s distributed, CARES Act funding requires local governments to follow federal guidelines for use. While Walz move forward with distribution, Minnesota’s 11 sovereign nations have had headaches with the process.

“That $8 billion [for Native American tribes> was specifically constrained to be only for basically reimbursement for COVID-related expenses,” Sen. Tina Smith said.

Smith hosted a roundtable with Minnesota Indigineous leaders Wednesday where they expressed frustration with a clunky system that keeps their hands tied.

Gov. Walz is submitting the proposal to the legislative advisory commissioner for review. The Department of Revenue will distribute funds on a rolling basis beginning next week.