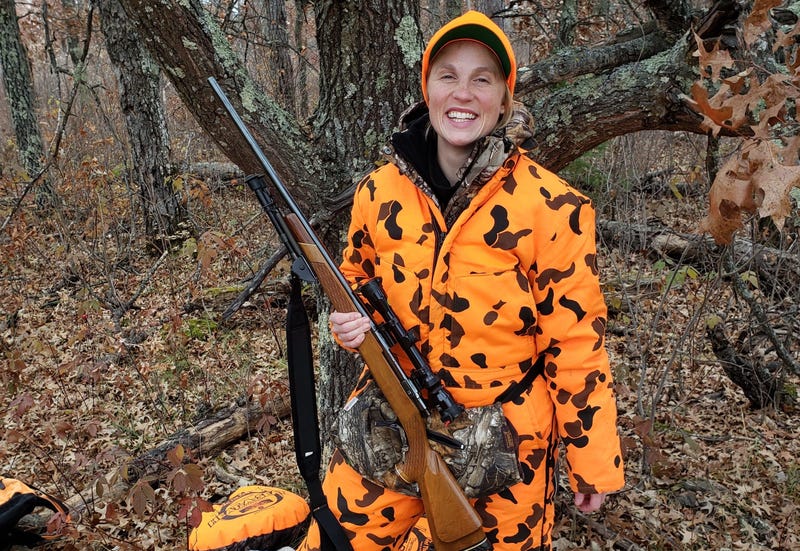 Claire Gahler stands in the living room of her Richfield home.  In jeans and a sweatshirt, the 34-year old looks like any other young suburban mother.

Out of place in the comfy living room, the rifle, which her father gave her, is the main tool of her fairly new hobby.  This is the second year the working mother has hunted deer.

Claire grew up in the state of Wyoming, and you may think she grew up into the sport of big game hunting.  But that's not the case.

"I had zero interest in it just because it was so commonplace."

It wasn't until years later, after a move to Minnesota, as well as a marriage and the birth of a child, that she discovered a Minnesota DNR mentorship program for women wanting to get involved in the outdoors.

Claire is not alone.  Women represent one of the few demographics where participating in hunting is on the rise.  Albeit slightly, recent DNR figures show the percentage of women buying deer hunting licenses has risen in the last decade, while the number of men buying deer tags has been dropping.  More than 70,000 of the half-million people headed out to deer hunt in Minnesota this weekend will be women, flipping the script for many households like Claire's.

"You hear about those widow's weekends, where the husbands are gone and the wives are at home.  That's like the exact opposite of what happens with our family," Gahler laughs.

When asked if she'll eventually get her two year old daughter Edith into hunting, Gahler says she'll leave it up to her.

"Part of it is on me, to talk about my experiences and show her my (hunting) gear and (explain) why I am leaving for the weekend.  So I hope it's something she can grow into."

One thing is for sure.  Hunting isn't something the whole family will do.  She says her husband is content staying home.

"He's not going to go out and shoot a deer.  But maybe in 10 or 15 years I can take my daughter out.  If I can build her to be my hunting buddy, that sounds pretty cool."

Gahler took part in her second mentored deer hunt last weekend near the St. Croix State Park.  She had a moment many veteran hunters wait a lifetime for.

"This ten point buck walks between these two oak trees and just stands there broadside.  It was like straight out of a movie."

"I got my gun up, and rather than pulling the trigger I went, "Wow!" And (the mentor) had to lean over and go, "It's a good shot."  And I think by that time the deer had already taken a step away."

But to say the hunt was unsuccessful just isn't true.  She says she was amazed by the things she witnessed perched high above the forest floor.  Including a pack of wolves that came through and then howled after they walked out of sight.  To Claire Gahler, like many other hunters who silently walk into the woods every November, the sport is much more than bagging a deer.

"I get it," Gahler says enthusiastically. "Like I get it now. I get why people do this."

CHECK IT OUT: Minnesota DNR's Becoming an Outdoors Woman Program